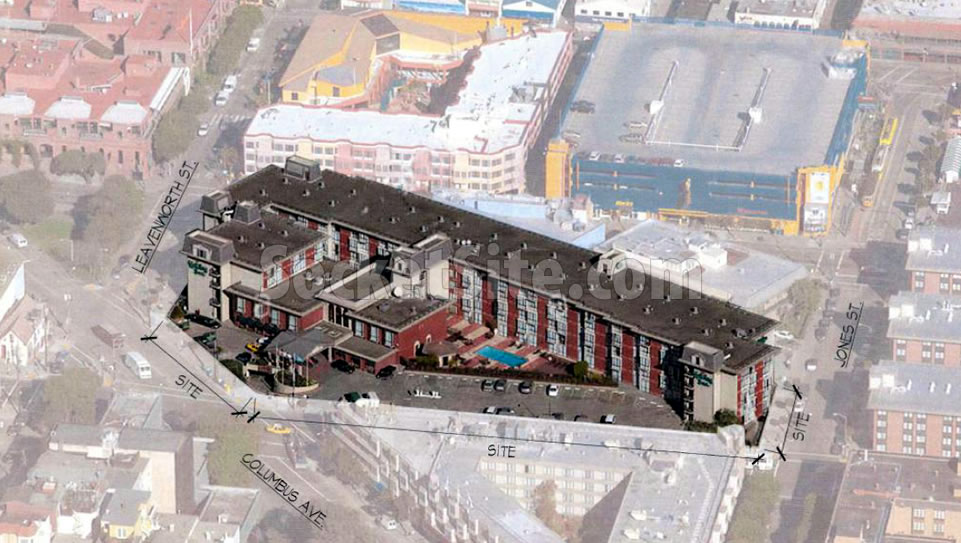 While the mass of the proposed four-story addition to rise upon the parking lot of the Fisherman’s Wharf Holiday Inn at 1300 Columbus Avenue hasn’t really changed, its façade has been completely redesigned following Planning’s preliminary feedback to the project team.

And the formal application to move forward with the 88,000-square-foot addition, which would yield an additional 174 hotel rooms and 8,200 square feet of new retail space fronting North Point and Columbus has been submitted to the City for review. 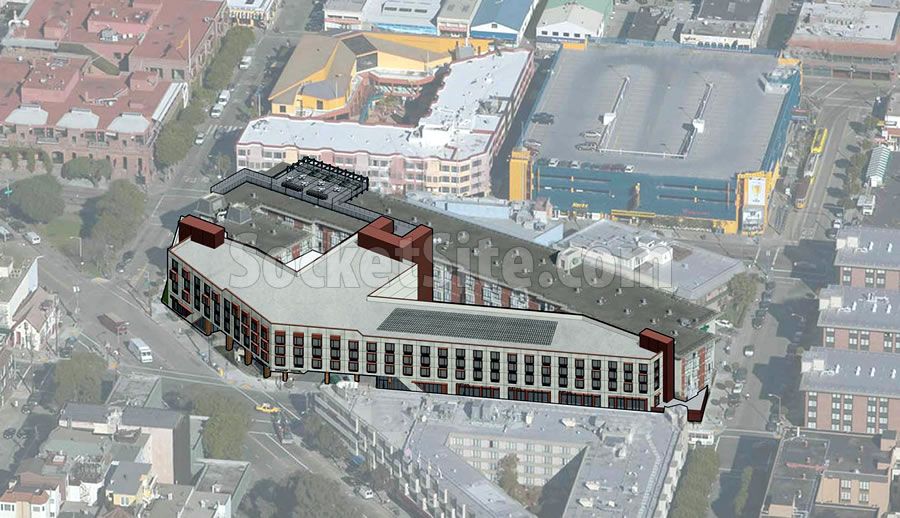 From the project team with respect to the revised design:

“The revised design includes a larger lobby with direct frontage onto North Point Street. Entry doors here will improve wayfinding into the hotel and provide direct pedestrian access to the lobby without requiring people to walk through the porte cochère. At ground level, the revised design includes intervals of cement plaster and storefront glazing to provide a pedestrian-scaled rhythm along the sidewalk.”

“Vertical metal panels interspersed in the storefront also add variety to the facade experience at street level. The building is no longer “floating” above an all-glass retail level; instead large swaths of cement plaster connect the façade on all four levels so as to “ground” the building.”

And with respect to “Celebrating the Corner,” as requested by Planning, and revised palette:

“The revised design includes unique architectural articulation at the corner to emphasize the main entrance. Diagonal geometries frame the two sides of the porte cochère and connect to a raised portion of parapet above the corner of Columbus and North Point. Many window boxes in this zone are popped out from the facade (and also taller) to further celebrate the corner.”

“The ground level columns and the underside of the porte cochère are clad in wood veneer to differentiate the corner from the rest of the building, as well as provide texture and warmth to the main entry. Hotel signage wraps the corner facade to give the building presence from both streets.”

Once again, the proposed expansion of the 46-year-old, 342-room hotel would result in the loss of 54 parking spaces but the remaining 166 spaces “will provide more than sufficient parking for hotel guests and staff.”  Well keep you posted and plugged-in.