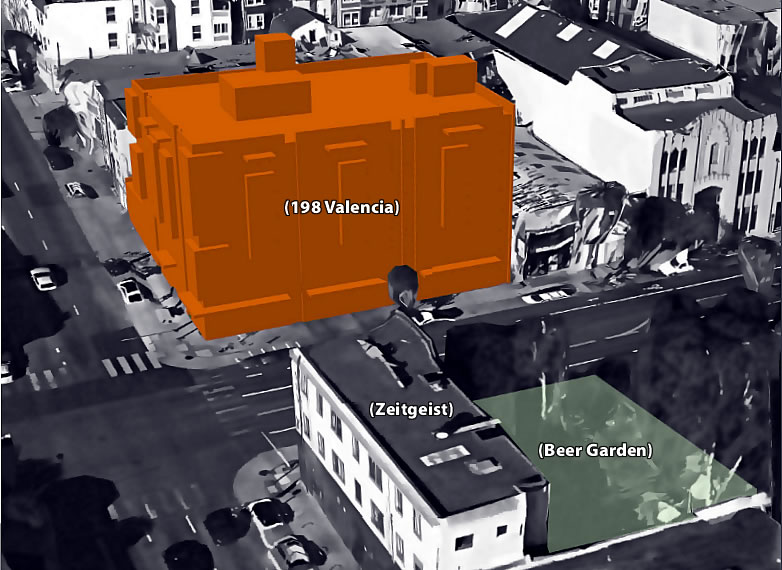 As proposed, a new five-story building with 28 condos over 6,300 square feet of new retail space and a 19-car garage will rise upon the Oil Changer site at 198 Valencia Street.

In August, shortly after anti-tech flyers were posted in front of the bar, the owner of Zeitgeist filed a formal challenge of the project, citing concerns that the development would cast additional shadows on Zeitgeist’s (back yard) beer garden at 199 Valencia Street and adversely affect the bar’s business.

Last month, Zeitgeist’s challenge was heard by San Francisco’s Planning Commission, which requested an additional shadow analysis and continued the hearing to next week.

From Zeitgeist’s latest plea to the Commission, which seeks to have the height, design and positioning of the development altered:

“Throughout this process, the developer has demonstrated an unwillingness to cooperate with Zeitgeist in order to adequately address the valid impact that this proposal has on our business.

In our view, the developers have followed the “letter of the law” rather than the “spirit of the law” in holding the required Pre-Application Meeting, but not actually discussing and addressing the concerns of the stakeholders.”

But with the new analysis in hand – which projects that the proposed development will add 255,000 square foot hours of net new shadow on Zeitgeist’s garden, a total annual increase of just 2.06 percent but with the maximum impact occurring on April 26th and August 16th (“when some new shadow would be present in locations within the Beer Garden for a period of approximately 2 hours” and affecting up to 37% of the garden area) and the days between – San Francisco’s Planning Department is recommending that the development be approved as proposed. 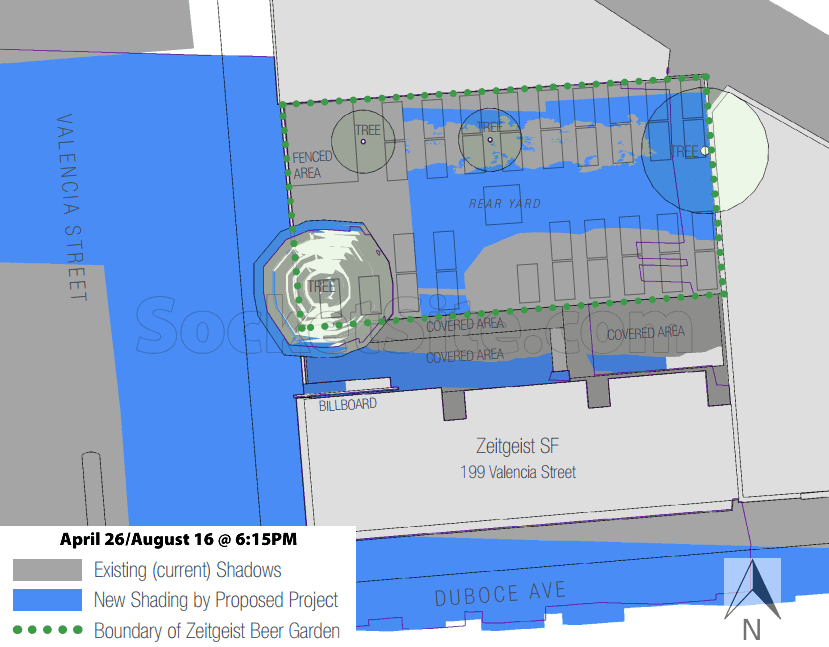 The Department’s reasoning for its recommendation:

Keep in mind that neither San Francisco Planning Code nor the California Environmental Quality Act (CEQA) require a project to consider or design around the shadowing of a neighbor’s back yard, unless said yard is a public space.

And while Zeitgeist has been designated an official Legacy Business by the City, said designation doesn’t confer any special protections beyond financial support.