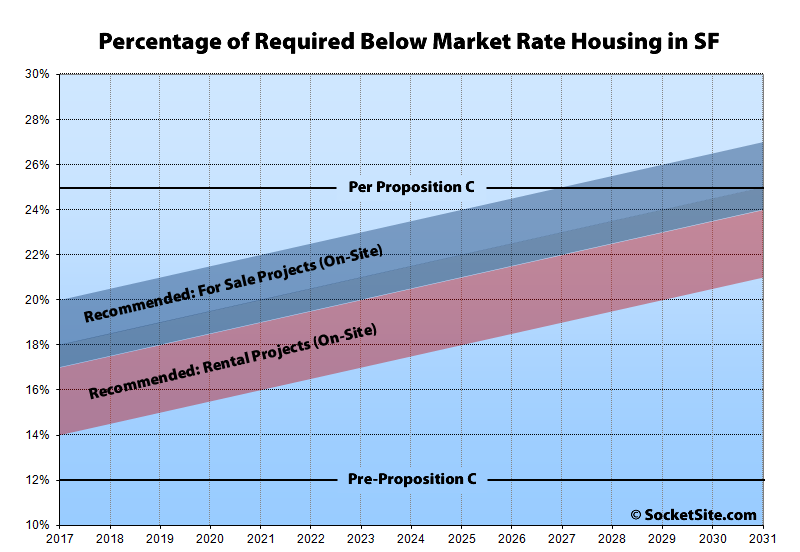 Voters in San Francisco passed Proposition C last year, a ballot measure which effectively doubled the percentage of below market rate (BMR or “affordable”) units that developers of larger market rate projects would be required to provide on-site or fund elsewhere in the city.

Prior to the vote, San Francisco’s Inclusionary Housing Program required developers of ten units or more to price 12 percent of the on-site units at below market rates or pay an equivalent 20 percent fee. Proposition C increased the inclusionary housing requirement for developments with 25 units or more to 25 percent and 33 percent, respectively.

That being said, Proposition C also raised the income threshold for the designated affordable units, allowing roughly half the required below market rate units to be priced as affordable to middle-income households making up to 100 percent of the Area Median Income (AMI) for rental units or 120 percent of the AMI for condos.

In addition, the Proposition granted the City the right to alter the required percentage of BMR units based on recommendations from San Francisco’s Controller. And this afternoon, the Office of the Controller released its final report and recommendations, which included a strongly worded letter of dissent from a quarter of the Technical Advisory Committee (TAC) members appointed by the Mayor and Board of Supervisors.

The Office of the Controller’s final recommendations and percentages:

And from the summary of dissent from TAC members and local affordable housing developers, John Elberling (TODCO) and Whitney Jones (Chinatown Community Development Corporation), who advocated for higher percentages of affordable housing and challenged the report’s methodology and appropriateness:

“…it should come as no surprise that a TAC process composed of 5 for-profit housing developers/financiers, 1 mega-national nonprofit developer, and 2 San Francisco community affordable housing developers finally voted 6-2 to recommend the Alternative that…(1) maximizes windfall profits for developers/land owners from the new State Density Bonus Law, [and] (2) provides the least Affordable Inclusionary Housing for the people of our City.”

San Francisco’s Board of Supervisors will now be tasked with either adopting or challenging the Office of the Controller’s recommendations.