Will Millennials Tax Family Housing in SF or Flee with Kids in Tow? 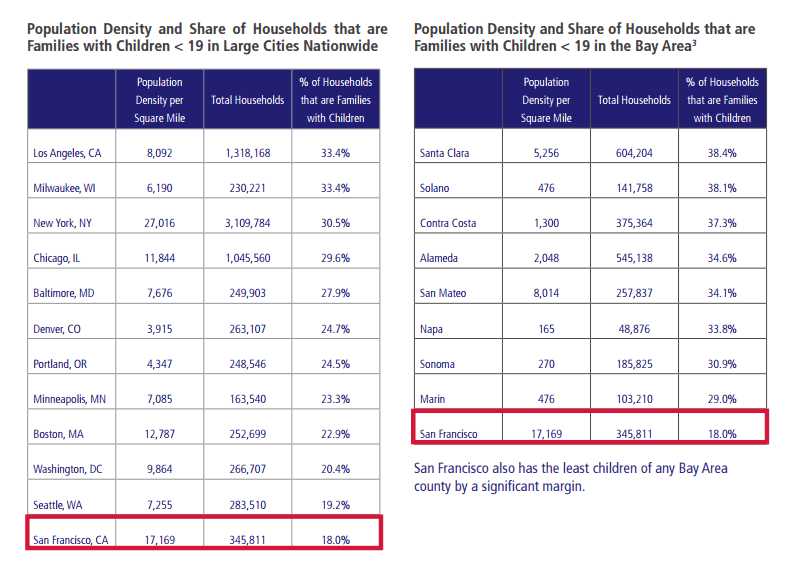 San Francisco has the lowest percentage of children of any major city in the United States, with only 18 percent of San Francisco households including a child under 19 years old versus a nationwide average of over 29 percent. But it’s not a new phenomenon. And 37 years ago it measured 18.9 percent.

But with Millennials now accounting for the highest percentage of the population in San Francisco, said cohort starting to reach the average childbearing age (which is 33 for women in San Francisco), and a preference for urban living having emerged over the past decade, concerns about a lack of focus on the development of family friendly housing in San Francisco, versus the building of ever smaller units targeting single tech workers with six figure incomes, is gaining steam.

Released yesterday and slated to be presented to San Francisco’s Planning Commission tomorrow, the Planning Department’s “Housing for Families with Children” report is intended to spark a conversation “between agencies, policymakers, and communities” about the dearth of family-friendly housing in San Francisco.

The report’s proposed next steps for digging deeper into the issue and exploring a couple of near-term solutions:

That being said, once the Millennial generation hits peak childbearing years, it could very well follow the generational patterns of yore and exit the city once families begin to form.

Evolution on Market and Grove