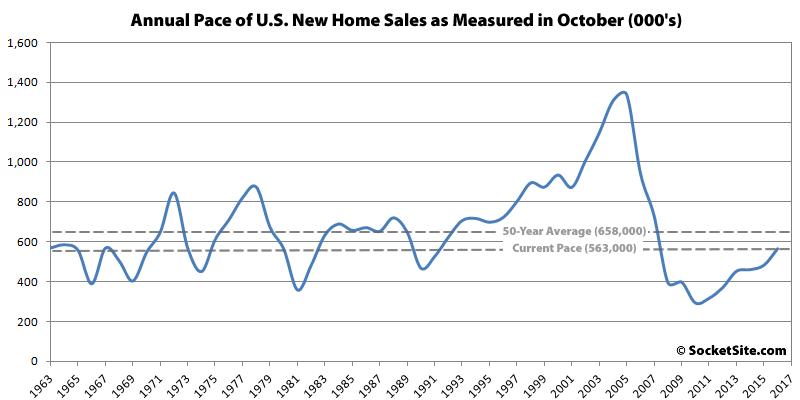 The seasonally adjusted pace of new single-family home sales in the U.S. slipped 1.9 percent in October, from a downwardly revised rate in September, and has dropped 9.5 percent since July. But the current rate of 563,000 sales remains 17.8 percent higher versus the same time last year, down from 29.8 percent higher on a year-over-year basis in September, and is the highest October pace in nine years.

That being said, the current pace of sales is half the record-high rate for this time of the year (1,336,000), as set in October of 2005, and is 14.6 percent below its long-term average (659,000) having appeared to have broken through in July for the first time in nearly a decade before being downwardly revised.

In terms of inventory, the number of new single-family homes for sale across the county has ticked 2.9 percent to 246,000 which is 9.3 percent higher versus the same time last year.

The pace of new single-family home sales in the West, however, ticked up 8.8 percent, representing the month-over-month regional gain, and remains 28.7 percent higher versus the same time last year.