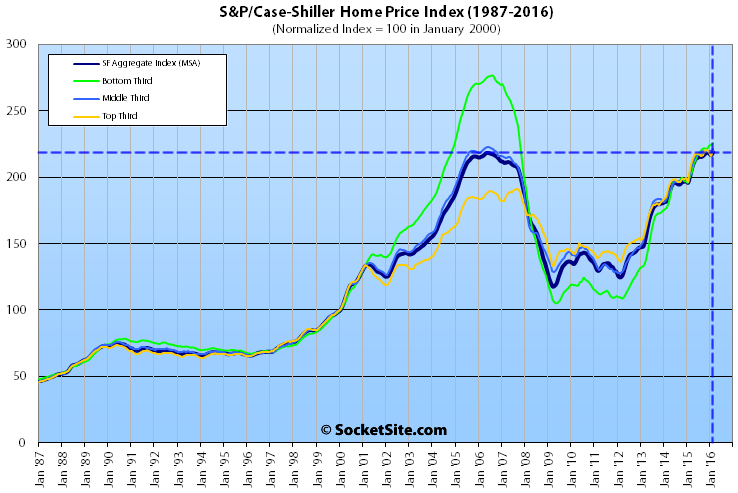 Driven by the top-third of the market, the Case-Shiller Index for single-family home values within the San Francisco Metropolitan Area ticked up 1.1 percent in February to a new all-time high, surpassing the previous peak set ten years ago in May of 2006.

The single-family home index has gained 9.3 percent over the past year and 61 percent since January of 2010. And the index for Bay Area condo values has hit a new all-time high as well.

Single-family home values for the bottom third of the San Francisco market remain 18 percent below their 2006 peak values but ticked up 0.5 percent in February, are running 12.5 percent higher versus the same time last year, and have more than doubled since bottoming in 2009.

Having ticked up 0.7 percent in February, home values for the middle third of the market remain 1 percent below their 2006 peak but have gained 10.5 percent over the past year and 73 percent since 2009.

And reversing a two month slide, the index for the top-third of the market gained 1.8 percent in February, is running 8.6 percent higher on a year-over-year basis, and is now 14.8 percent above its previous cycle peak set in August of 2007 having gained 65 percent since bottoming in 2009.

The index for San Francisco condo values gained 1.0 percent in February and hit a new all-time high which is 11.6 percent higher versus the same time last year and 19.0 percent higher than in October 2005 which was the previous cycle peak. 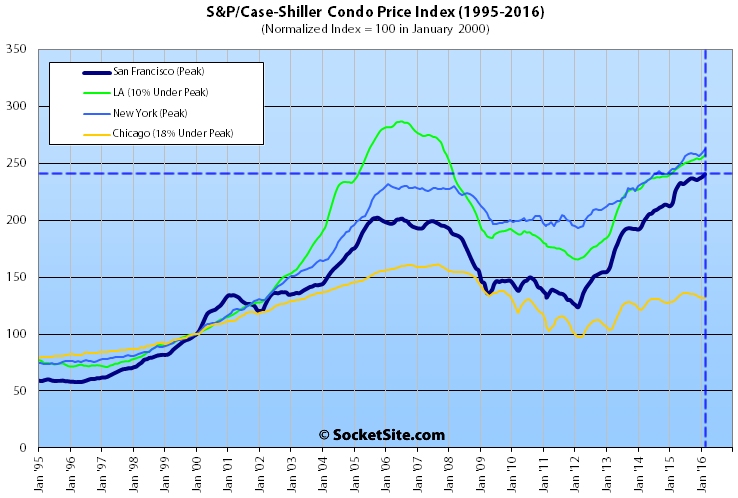 The index for home prices across the nation was relatively unchanged in February, having ticked up 0.2 percent, and remains 5.3 percent higher on a year-over-year basis and 4.9 percent below its July 2006 peak.