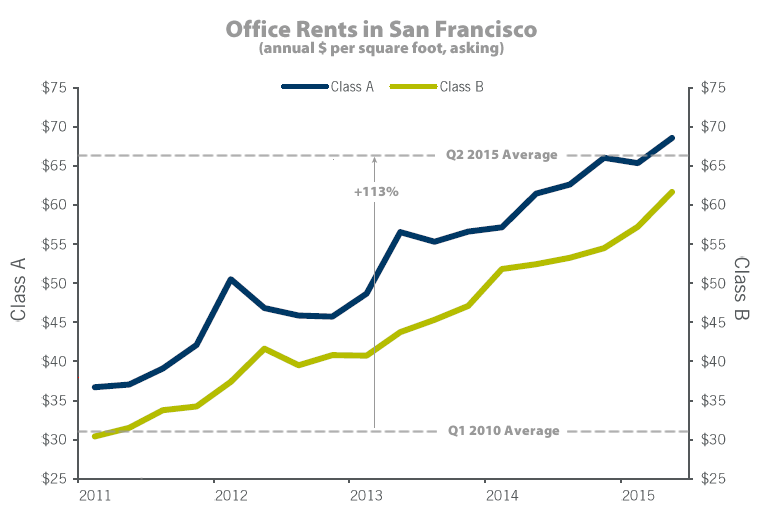 That being said, potential demand remains high and DTZ is currently tracking interest for 5.5 million square feet of space, which is relatively unchanged from the same time last year.  But a number of factors are slowing absorption and deal flow in the city.

In fact, the current average asking rent for office space in San Francisco has increased 113 percent since the first quarter of 2010 and is within 6 percent of the historic peak ($70.94) reached at the height of the dotcom boom in the third quarter of 2000.

In the words of DTZ, “while growing technology companies have a seemingly insatiable demand for office space, despite the high prices, the increasing rents continue to put a strain on established businesses that are more focused on the bottom line.”

Or as we wrote nine months ago, “it’s not just the non-profits that are now being driven out of the city in search of cheaper space, but professional firms as well, with the surge in rental rates negatively affecting profitability for businesses that are worried about such things.  And in the near term, it’s likely to get worse.”

For those looking for relative bargains, the areas around Jackson Square ($56.41) and Rincon Hill ($59.81) are currently asking the least, while “creative space” and access to transportation continue to command a premium and the most expensive area in San Francisco remains around AT&T Park with an average asking rents of $79.05 per square foot.

And of course, the average asking rent for office space in downtown Oakland is currently running around $38.50 per square foot.