San Francisco Rents Pushing Professional Firms Out Of The City 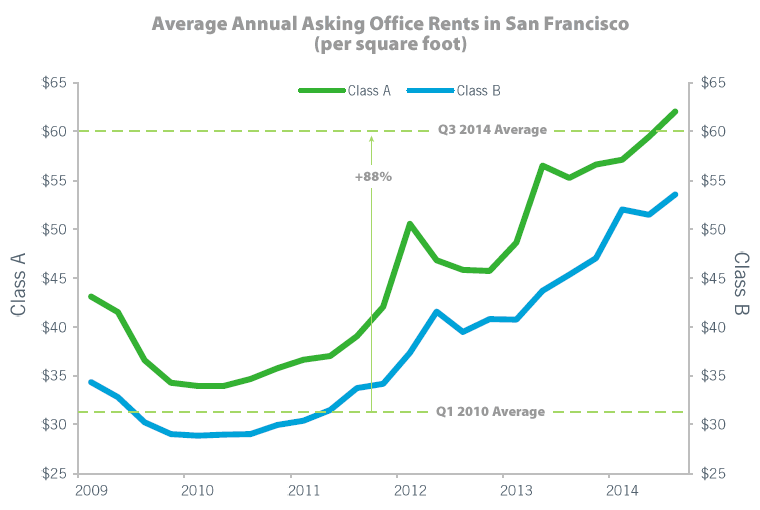 With demand for office space in San Francisco having reached an all-time high, the average asking rent for space in the city has increased 15 percent over the past year and nearly doubled since the first quarter of 2010, up 88 percent to just under $60 per square foot.  That being said, rents remains around 15 percent lower than at the height of the dot-com boom.

According to Cassidy Turley, it’s not just the non-profits that are now being driven out of the city in search of cheaper space, but professional firms as well, with the surge in rental rates negatively affecting profitability for businesses that are worried about such things.  And in the near term, it’s likely to get worse.

While there is currently over 4 million square feet of office space under development in San Francisco, the largest pipeline of commercial space in over thirty years, the majority of the pipeline won’t be ready for occupancy until post-2015, and over half the space has been speculatively pre-leased by companies such as Salesforce , Uber and LinkedIn.

For those looking for relative bargains, the areas around Showplace Square ($47.54) and Jackson Square ($50.19) are currently asking the least, while “creative space” and access to transportation continue to command a premium and the most expensive area in San Francisco remains around AT&T Park, with an average asking rent of $66.38 per square foot.

Hidden Behind An Imposing Looking Gate In The Tenderloin