Caltrain’s Recommendations Sure To Piss Some Riders Off 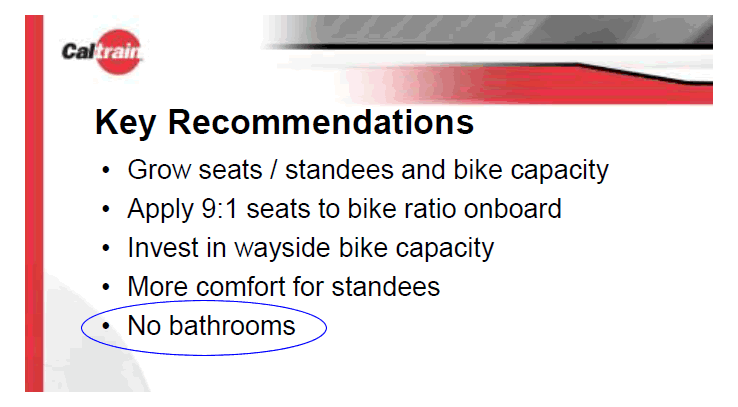 No bathrooms on Caltrain? That’s the recommendation of Caltrain’s staff as they prepare to issue the official Request for Proposals to supply the new electric train cars which are slated to go into service in 2020 (or more likely 2021).

By eliminating bathrooms, Caltrain estimates it can add an additional 32 seats, or room for 64 standees, to each train and save on both capital and ongoing maintenance costs.

In addition, and despite the fact that the use of bikes has been growing faster than overall ridership (which has increased nearly 150 percent over the past decade), staff is recommending that the electric train cars maintain the current capacity ratio of one bike per every nine seats.

The Bicycle Coalition is asking for an increase in on-board bike capacity to one bike per every six seats.  Caltrain staff is countering with a recommendation for $3 million in funding for wayside bike facilities to increase secure off-board bike storage at stations.