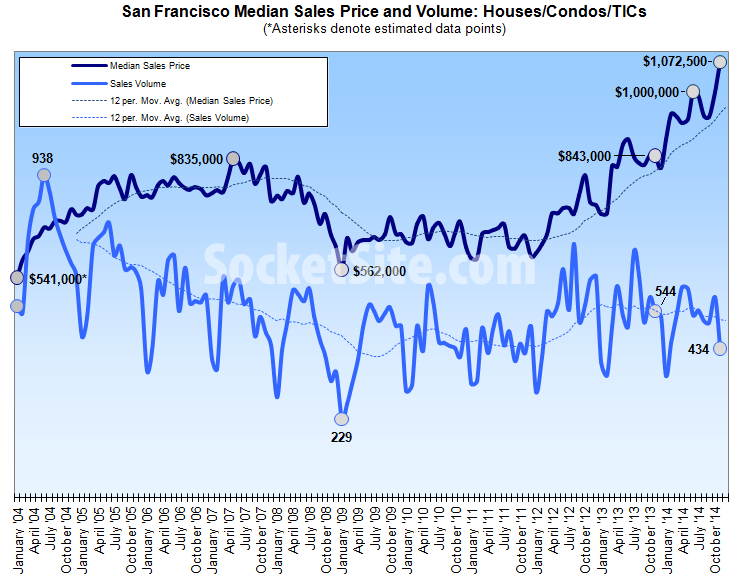 Having rebounded in October, San Francisco homes sales took a big hit in November, with the sales volume dropping nearly 26 percent from the month before and running over 20 percent lower versus the same time last year.  And while the sales volume in San Francisco typically dips from October to November, the dip has averaged closer to 5 percent over the past ten years.

The sharp rise in the median price is currently being driven by an increase in the share of luxury home sales.  That being said, the median sale price for a home in San Francisco was 27 percent higher on a year-over-year basis last month and 91 percent higher than the last low-water mark of $562,000, which was recorded in January of 2009.

Across the greater Bay Area, homes sales dropped 22 percent from October to November and are down 10 percent year-over-year for the slowest November on record in six years.  At the same time, the median price paid held steady at $601,000, roughly 9 percent higher on a year-over-year basis and 107 percent higher than the low-water mark of $290,000 recorded in March of 2009.  The Bay Area median home price peaked at $665,000 in July of 2007,

At the extremes around the Bay Area last month, Alameda County recorded the greatest drop in sales volume behind San Francisco, down 15 percent versus the same time last year with a median price of $585,000 (up 13 percent year-over-year).  And Solano was the only Bay Area County to record an increase in home sales last month, up 1 percent with a median sales price of $447,250 (up 11 percent year-over-year).