A Base For Google’s Exiled Barge? Pier 29 Plan Shaping Up

A ten minute walk from Pier 39 which is the most-visited attraction in San Francisco with an estimated 8.5 million visitors annually, and directly adjacent to San Francisco’s new Cruise Ship Terminal at Pier 27 which will serve 300,000 passengers and host up to 100 events per year, the Port of San Francisco has big plans for Pier 29.

As we first reported in July, the Port envisions turning Pier 29 into a themed marketplace of successful San Francisco retailers and restaurateurs, drawing on Chelsea Market in New York, Granville Island in Vancouver, Covent Garden in London and La Boqueria in Barcelona for inspiration and ideas.

While a food-themed market would hardly be unique and the Ferry Building is only a 15 minute walk away, one of the Port’s concepts for Pier 29 includes a showcase for local wine, beer, spirits and coffee, perhaps with roasting on-site.

And in terms of a Design and Makers Showcase, they’re thinking both big and small, with retail space for artists and artisans behind  a high profile anchor tenant such as Tesla or Google, the later of which could possibly use the pier as a home base for the exiled Google barge.

The official request for proposals to fill the anchor retail space at the front of the pier is slated to be issued this fall with an evaluation early in 2015 and lease approvals next Spring. 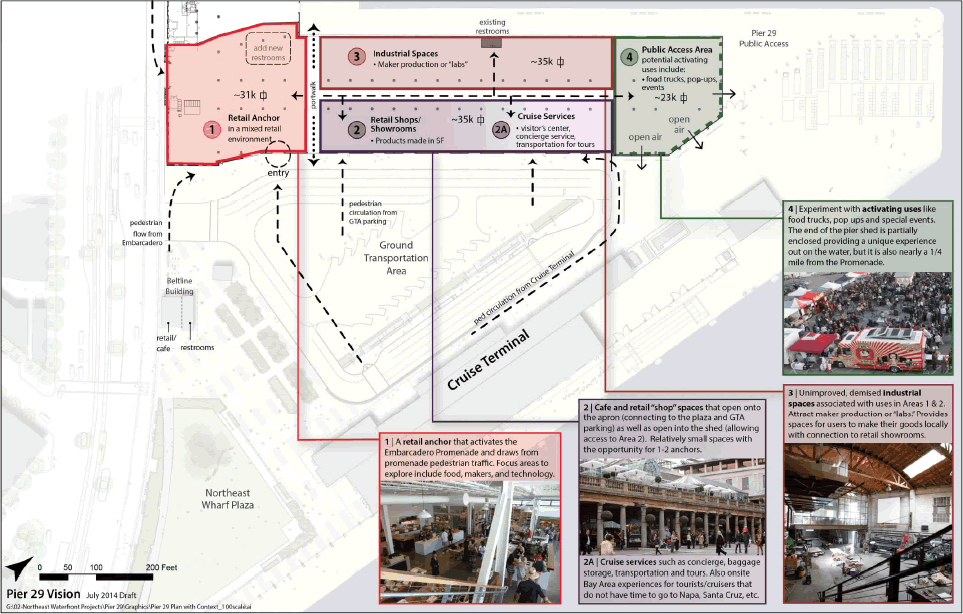 Sneak Peek: Five Designs For The Future Of The Presidio