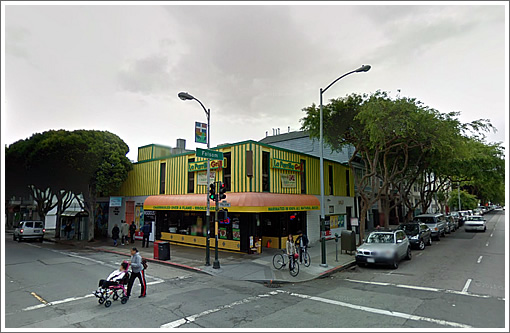 A plan to raze La Parrilla Grill’s two-story Mission District building on the southeast corner of Folsom and 24th Streets and construct a five-story building designed by Natoma Architects with 20 modern condos over 2,800 square feet of new ground floor commercial space has been submitted to Planning for review.

As proposed, a central courtyard would divide the top four floors of the building into two separate masses, but the façade along 24th Street would rise a continuous 55 feet.

A few of the Planning Department’s preliminary thoughts with respect to the project’s fit:

Although the proposed project is a significant mass increase in comparison to the surrounding buildings, the overall massing, site design, and open space on balance offers the scale and density appropriate to a block termination and nearby public transportation, including MUNI and BART.

However, to further increase its relationship to the character of the block, [the Urban Design Assistance Team] recommends removing the wall on the south side of the courtyard towards the inner portion of the block to align the courtyard and create an extension of the midblock open space.

And with respect to the building’s frontage along the street:

While UDAT appreciates the introduction of the arcade element to further define the relationship between the sidewalk and interior retail space, the arcade is out of character with its commercial context as currently designed as the heights of the openings are taller than surrounding facades, the narrow width is not useful public space, and the consistency of the column bays do not accentuate the retail or lobby entrances.

UDAT recommends changing the proportions of the ground floor expression to be more in line with the neighborhood scale in height, changing the bay depth or width or adding elements to emphasize entrances, and offering a more generous lobby space. The arcade should either be narrower to create a deep commercial façade or wider to be a functional and programmed transition to the retail and lobby.

A garage for ten cars via triple car stackers would be located along Lucky Street.