Will Bikes Lanes Be A Casualty Of A Head-On Collision Over Polk? 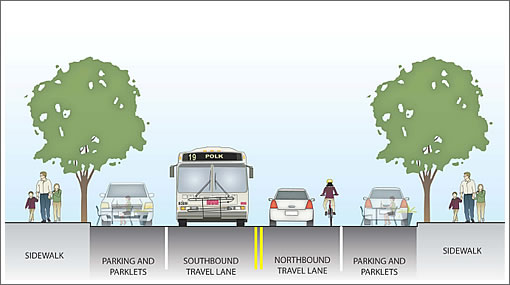 Having run head-on into a wall of seemingly unexpected opposition, the SFMTA has been forced to revisit their options for San Francisco’s Polk Street Improvement Project.
Opposing the Agency’s plan to remove up to 170 street parking spaces along Polk Street to make way for dedicated bike lanes, the Save Polk Street Coalition is pushing for a plan which would create corner bulb-outs to shorten crossing times, slow traffic by changing signals, and add “sharrows” to the roadway but wouldn’t result in any dedicated bikeway.

Making Money On The Buy (And Perhaps The Possession As Well)

The House With A Conscience Returns