The State Of San Francisco’s Downtown: Property, People And Parking 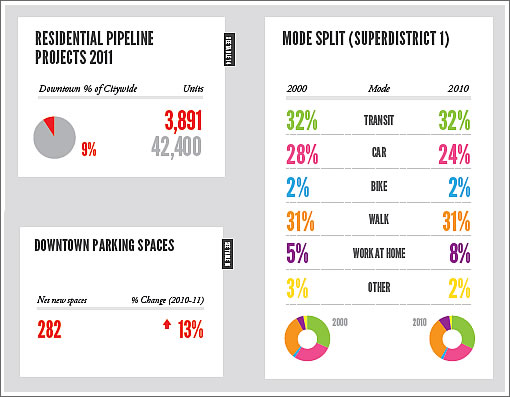 A few highlights from the Planning Department’s latest Monitoring Report for San Francisco’s Downtown which will be presented to the Planning Commission this week:

Downtown vacancy rates in San Francisco declined in 2011 and are now at 11% for office and 6.7% for retail as average downtown office rents have increased 16% to $39.25 per square foot. Roughly 13% (1.8 million square feet) of proposed commercial space in San Francisco’s entitlement pipeline is located Downtown.

Downtown San Francisco had a net loss of 31 residential units from demolition in 2011 versus a net gain of 269 units citywide. However, 9% of the proposed residential projects in the entitlement pipeline, or roughly 3,900 units, are located Downtown.

Raising The Threshold For Requiring Below Market Rate (BMR) Units