The Rumored Price Behind The Confidential Sale Of 2550 Lyon 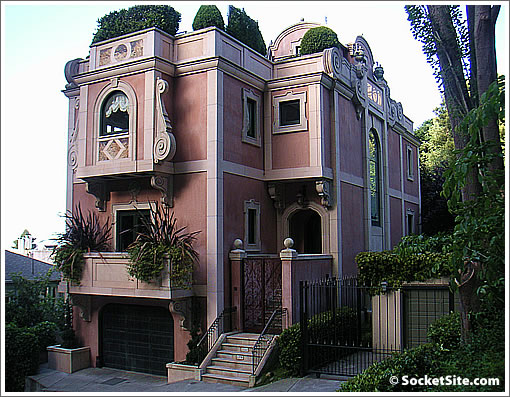 Listed for $9,800,000 in 2007, relisted in 2008 for $7,950,000, and last listed for $6,500,000 before being withdrawn from the MLS in 2010, the sale of 2550 Lyon quietly closed escrow last month hidden behind a confidential sale price at the Recorder’s office.
That being said, if a plugged-in tipster is correct, the sale price was $5.75 million while the property is rumored to have appraised for a million dollars less, luckily it was only a $2 million note being employed for the purchase.
Rumor also has it that several offers were made on the property over the past three years, all of them passed them up waiting for a more lucrative offer to appear and during which time 2550 Lyon had been listed for rent asking $22,500 per month.
∙ The Hanging Gardens Of San Francisco: 2550 Lyon [SocketSite]
∙ Might $22,500 A Month In Rent Actually Make More Financial Cents? [SocketSite]