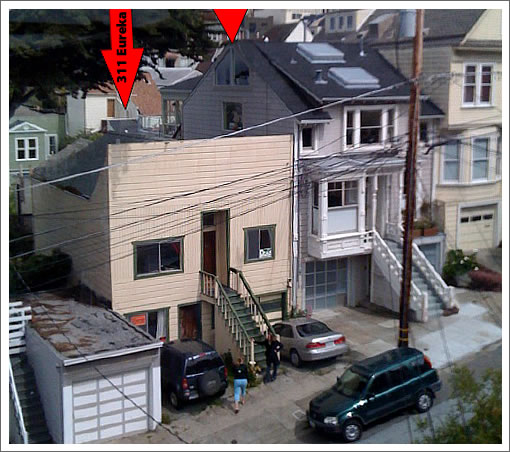 From one of two sisters living at 309-311 Eureka, a two-unit building that has been in their family since 1964 and which the sisters would like to raze, rebuild and reoccupy:

I have lived in the building for the past 19 years and my sister Clare has lived here for most of that time as well in the other unit. Once this project is complete, both Clare and I plan to move back into the new units.

Based on early records from the water department, the building was originally built as a single family home but was converted to 2-units at some point prior to my parent’s ownership. The lower unit is sub-standard. It has low ceilings (only ~7’4), is constantly cold and dark because it has limited access to direct light and also has a tendency for mildew. It is essentially a 4-room basement apartment. There is a huge disparity between the two units in terms of size, with the upper unit being the only one considered a family-sized unit.

In 2007, our family initiated discussions about a project that would enable my sister and I to continue to live in the building with our partners, each in a family-sized unit. During those discussions, the question of whether to pursue a remodel or a demolition came up. We evaluated the reality of modifying the existing building to achieve our goal of 2 family-sized units and recognized that there was nothing of the existing building worth saving.

∙ The foundation, where it exists, is old brick. It would need an entirely new foundation to support any new structure or addition to the existing building.
∙ The ceiling height of the ground floor would need to be elevated, meaning the floor of the upper unit would be moved (and the walls that support that floor).
∙ The ceiling height of the upper unit would be lowered (and the walls that supported that ceiling).
∙ The peaked roof would need to be replaced by a flat roof.

Based on the extent of the changes we needed to make, it seemed likely that the Planning Dept would declare the project a “de facto” demolition, so we chose to file form demolition. This seemed like the honest, practical and above all, safest way to pursue the project.

I know one of the City’s concerns regarding demolition is that it may reduce affordable housing. In this situation, it is the only way that my sister and I can afford to stay in the neighborhood we were born in and the city that we love.

San Francisco’s Planning Department supports both the demolition of the current building and construction as proposed. 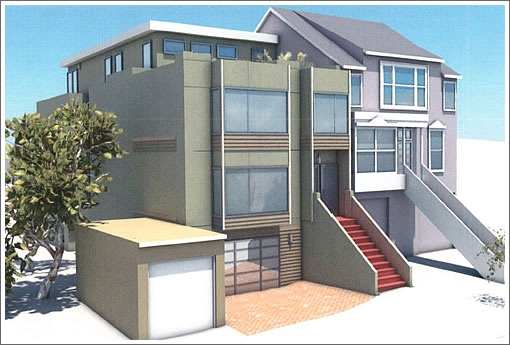 Opposing the project, however, are a couple of neighbors, including architect George Hauser whose stated issues include the potential “demolition of a historically significant building,” a new building inconsistent “with the character of the neighborhood,” and the impact on “a significant tree.”
At the heart of the matter, however, appears to be the impact on the “light, air and privacy” on the portion of Hauser’s home at 313 Eureka which was expanded, and to which lot line windows were added, three years ago.
From Mr. Hauser to the owner of 311 Eureka in 2009:

When I was undertaking the design for my remodel at 313 Eureka Street you made me aware that you were contemplating a replacement building at 311. I attempted to engage you in an effort to concurrently design our respective buildings. In the absence of your own resources to advance your thinking about the design for 311 and based on my extensive experience in residential design, I offered to assist you with schematic designs for 311. I did this because I wanted to be assured that our projects would be compatible to the maximum extent possible, especially with respect to the issues of access to light, air and privacy. You refused my offers and I was forced to proceed without the benefit of understanding your specific intentions.

Out of a deference to certain impacts that a vertical expansion of 313 would have had on surrounding properties, including 311, I made some very modest additions to the sides of my property, even though there is substantial unused zoning volume above my existing building. The 311 additions that were permitted and eventually constructed were unopposed by neighbors. Now, 3 years after my project was noticed and after it is 100% complete and occupied by me and my family, you have prepared plans for 311 that take almost full advantage of the 311 permittable zoning envelope, reflect an intention to invest millions of dollars in construction costs and show absolutely no consideration or sensitivity to the design of 311. In fact, you have designed 311 in such a way as to nullify some of the most important features of 313, especially with respect to access to light, air and privacy. I find this approach extremely insensitive, at the very least. The sums of money involved in the proposed 311 project alone warrant the forethought and collaboration I requested of you 3 years ago. 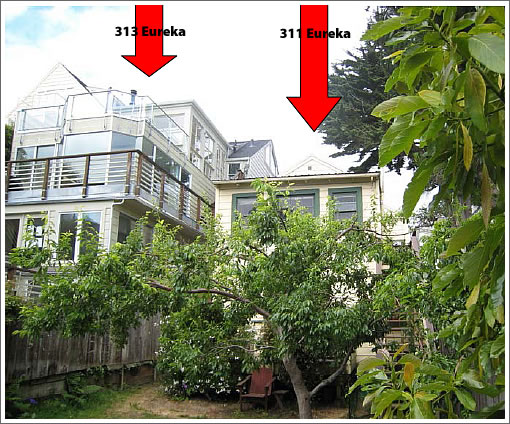 Tomorrow, it’s up to the Planning Commission to decide with whom they’ll side.
∙ 309-311 Eureka Discretionary Review Analysis [sfplanning.org]