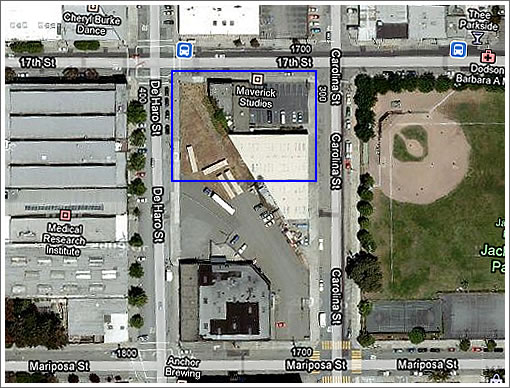 The project would be constructed in two phases as proposed:

Phase I (De Haro Street): Phase I would include demolition of the two existing wood‐frame buildings fronting 17th Street and the partial demolition of the concrete and aluminum building on site. Phase I would construct a new 48‐ft tall, 51,664 gross square foot (gsf), mixed‐use building containing 20 dwelling units with a unit mix as follows: ten two‐bedroom units and ten one‐bedroom units (21,345 gsf in total). The ground floor would also contain 7,500 sf of PDR/commercial/retail space, and 11,091 gsf of common area. The below‐grade basement level would contain parking for 29 off‐street parking spaces and 11 secured Class I bicycle spaces.

Phase II (228 Carolina Street): Phase II would be the demolition of the remainder of the concrete and aluminum building and construction of a 48‐foot tall, 51,664 gsf mirror image of the De Haro Street building, fronting on Carolina Street. This building would include 21 residential units with a unit mix as follows: nine two‐bedroom and twelve one‐bedroom units (21,315 gsf). This building would also include 7,500 sf of PDR/commercial/retail space and 29 below‐grade vehicle parking spaces and 11 Class I bicycle spaces.

And don’t panic, Anchor Steam’s distribution center at the south end of the block would not be harmed nor hampered (cheers), but new shadows would be cast over Jackson Park. 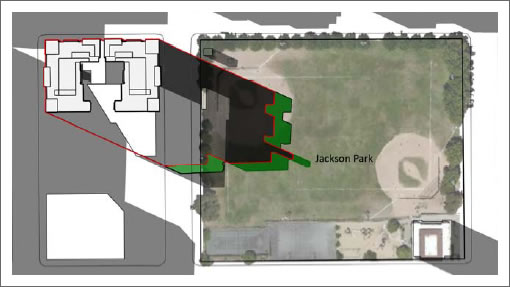 UPDATE: The shadow graphic above does in fact represent the expected impact on the Jackson Playground at June 21st, 7:30 PM for the proposed 48-foot building (green) versus a 40-foot alternative (outlined in red).

Apples To Apples (And Kitchens To Kitchens) For 1461 Sanchez