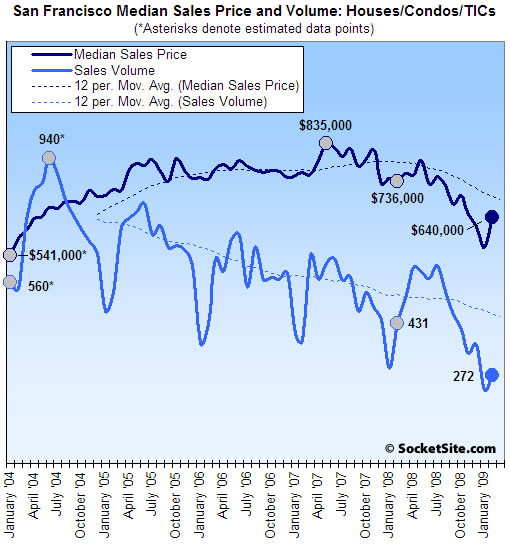 Last month 52 percent of all homes that resold in the Bay Area had been foreclosed on at some point in the prior 12 months, up from a revised 51.9 percent in January and 22.3 percent a year ago.

The use of government-insured, FHA loans – a common choice among first-time buyers – represented a record 24.9 percent of all Bay Area purchase loans last month.

At the extremes, Solano recorded a 100.4% year-over-year increase in sales volume (a gain of 279 transactions) on a 44.3% decrease in median sales price, while Contra Costa recorded a 70.4% increase in sales volume (a gain of 530 transactions) on a 51.9% drop in median sales price.
As always, keep in mind that DataQuick reports recorded sales (versus listed sales) which not only includes activity in new developments, but contracts that were signed (“sold”) many months or even years prior and are just now closing escrow (or being recorded).
Editor’s Note: We’ve adjusted the y-axis for Median Sales Price on the graph above which now crosses the x-axis at zero (as sales volume always has in months past).
∙ Bay Area home sales climb above last year as median falls below $300K [DQnews]
∙ San Francisco Recorded Sales Activity In January: Down 21.8% YOY [SocketSite]
∙ SocketSite Sees Seasonality (Versus Signs Of A Rebound) [SocketSite]