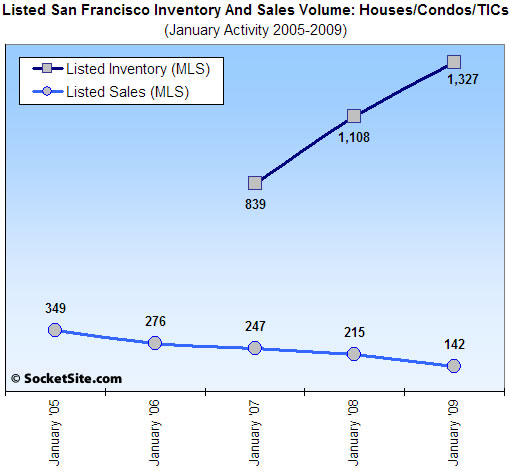 Based on an early count of 142 sales of listed single-family homes, condos and TICs in January, sales volume in San Francisco has dropped 34% on a year-over-year basis (versus a 13% drop from 2007 to 2008), and is down around 60% from four years before.
At the same time, inventory of listed and available single-family homes, condos and TICs is up 20% on a year-over-year basis (versus a 32% increase from 2007 to 2008) and is up 58% over the past two.
In terms of months of listed supply on the market at the end of January, in 2007 the count was 3.4 while in 2009 it was 9.4. Keep in mind, however, that January typically marks the seasonal low point for sales activity and sales counts should climb over the next five months (and at a faster pace than inventory).
CORRECTION: As a plugged-in reader correctly notes, we originally miskeyed the current January 2009 sales count as 162 (corrected above and throughout as 142). We’re triple checking everything else.
∙ SocketSite’s San Francisco Listed Housing Update: 2/02/09 [SocketSite]
∙ San Francisco Recorded Sales Activity In December: Down 17.8% YOY [SocketSite]