Fortunes Can Be Fleeting (And Mansions Can Be Foreclosed Upon) 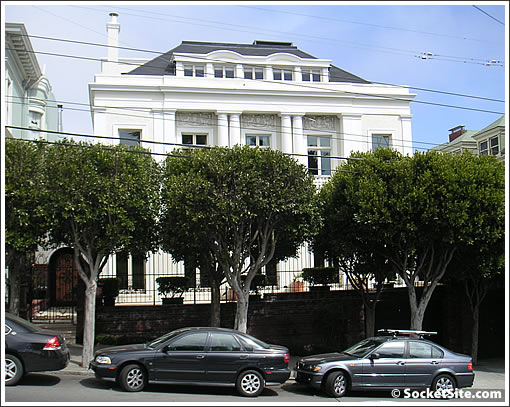 From the listing for 2510 Jackson:

From our plugged-in tipster:

And from us: Home to Danielle Steele and John Traina before moving a few blocks east to the Spreckles Mansion in 1989, 2510 Jackson was purchased by Critical Path founder David Hayden in 2000. As Hayden’s fortunes changed along with those of Critical Path during the dot-com bust, Robertson Stephens moved to foreclose on the mansion in 2002. And then a few months later, Robertson Stephens’ fortunes changed as well.

We don’t know who actually ended up with the mansion on their books (although we do know that Bank of America was in for $5 million in 2000), or when it actually landed there (PropertyShark seems to suggest it’s still owned by Hayden). But we do know the asking price in 2008: $14,900,000.

Now about that newfangled dot-com web 2.0…

Do As The Agent Says, Not As The Listing Notes (Or The Sellers Do)

We Know, We Know...Earthquakes (But We Do Love Our Books)