They’re Betting Against Us (San Francisco) On The CME 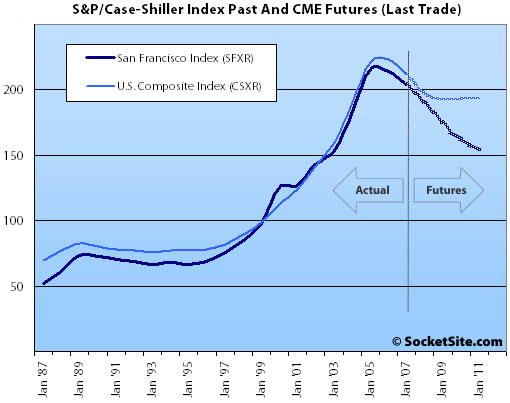 It was a little over a year ago (May 2006) that housing futures based on the S&P/Case-Shiller index for ten Major Metropolitan Areas (as well as a ten city composite) began trading on the Chicago Mercantile Exchange (CME). And it was last week that the market was expanded to include contracts of up to five years in duration.

A few important things to keep in mind: liquidity and open interest in the CME housing markets are painfully low; the “San Francisco” index includes San Francisco, San Mateo, Marin, Contra Costa, and Alameda counties; and the index is based on changes of single-family home values (and not condos). That being said, the market does represent real traders betting real money on movements in the local housing market.

Again, it’s a thinly traded market with significant bid/ask spreads (especially on the longer duration contracts), and it’s not specific to “San Francisco” county. But these are real dollars at work. It is another data point worth watching (if not for magnitude, then at least for direction). And yes, we’ll keep you plugged-in.

Damn Those Direct Comps In The Marina (1307 Bay Street)