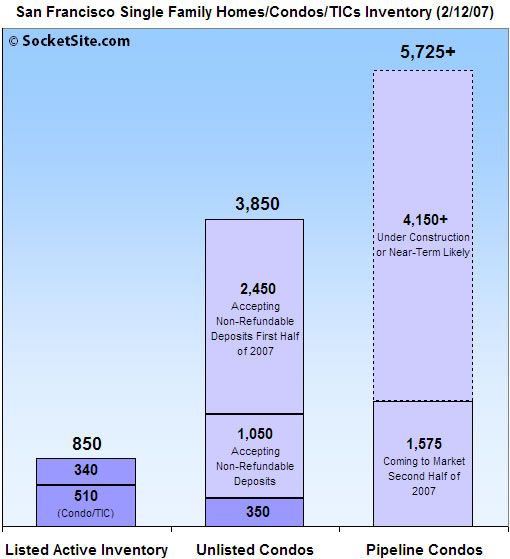 If you’re truly “plugged in,” you should already be familiar with SocketSite’s Complete Inventory Index (Cii) for San Francisco. As we wrote last September:

Over the past quarter, we have doubled the size of our new development database and SocketSite now tracks the size, status, probability, pricing, sales, and available inventory for nearly 125 new developments in San Francisco (15,000+ condominiums in total). We also track 10,000 “net new housing units” (including rental units) that are either proposed or on the drawing boards. And all told, we are actively keeping tabs on a potential inventory of 25,000+ housing units (i.e., San Francisco’s overall housing pipeline).
As it stands, in addition to the roughly 325 San Francisco condominiums that are listed and available for sale on the San Francisco MLS, we estimate that there are approximately 350 new condominiums that are not listed, but are currently available for purchase and immediate occupancy. These condos include unlisted inventory in buildings ranging in size from The Glassworks to The Beacon.
We also estimate that there are currently an additional 1,050 available condominiums that are actively competing for the attention of buyers and accepting non-refundable deposits in sales offices throughout San Francisco (examples include The Infinity, Heritage on Fillmore, and Arterra). And within the next six months, we expect to see an additional 2,450 condominiums begin marketing, accepting deposits, and competing for sales as well (think The Potrero, Symphony Towers, and The Bay).
Looking forward to the second half of 2007, we see an additional 1,575 new condominiums that are likely to start marketing/selling before the end of the year (or relatively soon thereafter). And for 2008/2009, we see 4,000+ units that have a shot of making it to market (and 2,000+ that will likely fall by the wayside).
Beyond that, well…you’ll just have to keep “plugging in.”
∙ SocketSite’s Complete Inventory Index (Cii) [SocketSite]
∙ Glassworks (207 King): 3 Years Paid HOA And Further Reductions [SocketSite]
∙ The Beacon: Sales Office Incentives [SocketSite]
∙ The Infinity: Online Floor Plans And Condo Specifications [SocketSite]
∙ Heritage On Fillmore: The VIP Scoop [SocketSite]
∙ Evidence Of A Price Reduction At Arterra? [SocketSite]
∙ The Potrero (451 Kansas): Sales Center Opening In February [SocketSite]
∙ Symphony Towers: From The $300,000s [SocketSite]
∙ The Bay (329 Bay Street): Complete Pricing [SocketSite]