Heritage On Fillmore: The VIP Scoop 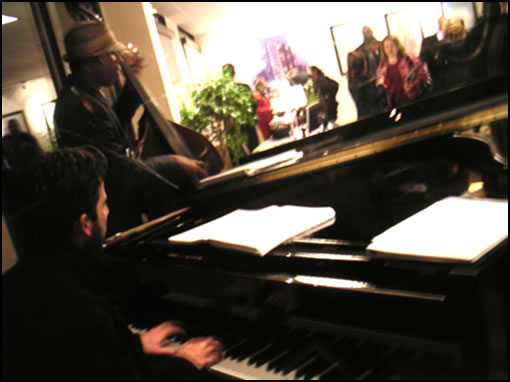 We made it over to Heritage on Fillmore last night for their VIP Grand Opening. And while we were digging the jazz, the people, and the vibe of the building, we have to admit that we were a bit under whelmed by the actual event. (Perhaps we’ve been spoiled by the openings and showrooms of One Rincon, The Infinity, and Arterra/Hayes.) Regardless, we got the scoop.
The sales center (1294 Fillmore, across the street from the Heritage) opens its doors to the public tomorrow, but they’re not going to start accepting deposits until mid-January (at which point a model unit on the 3rd floor should be open for hard hat tours). No word on whether they’ll start accepting “reservations” sooner.
Six floor plans will be offered, and pricing is expected to range from the low $500’s to high $600’s for one-bedrooms (37 including BMR), from the mid $700’s to a little over a million for two-bedrooms (38 including BMR), and in the $900’s for the five three-bedrooms. Stainless steel Kenmore ranges, microwaves, and dishwashers are included; but refrigerators, washers and dryers are not.
Marketing folks at the event were suggesting occupancy in mid-March, but a press release noted, “move-in date for the condos at The Heritage on Fillmore is anticipated for April 2007 and the grand opening of Yoshi’s San Francisco and other components of the Fillmore Heritage Center will occur mid-summer 2007.”
And of course the SocketSite super scoop, rumor has it that ten (10) units are being reserved for the developer. Or in marketing speak, “10 units already sold!”
∙ The Heritage On Fillmore (1300 Fillmore) [SocketSite]
∙ Heritage On Fillmore: VIP Grand Opening (12/5/06) [SocketSite]
∙ Heritage On Fillmore And 170 Off Third: BMR Updates [SocketSite]