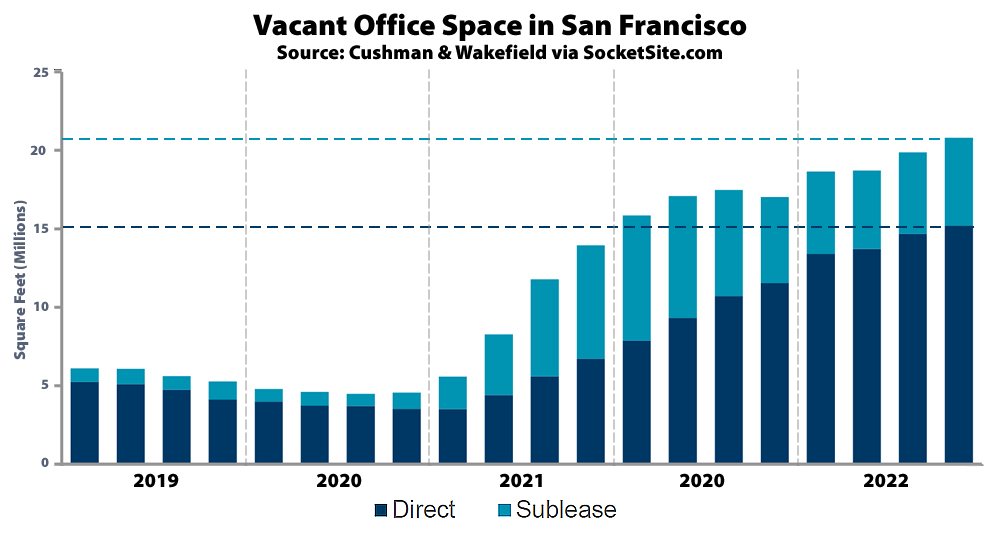 As a point of comparison, there was less than 5 million square feet of vacant office space in San Francisco prior to the pandemic and the vacancy rate in San Francisco has averaged closer to 12 percent over the long term, with a much smaller base of buildings.

At the same time and despite more companies having ramped-up their return to office (RTO) policies in the second half of last year, the estimated active demand for office space in San Francisco dropped 20 percent over the past quarter to 3.8 million square feet, driven by companies “downsizing their office space needs” and future growth plans.   That’s compared to over 7 million square feet of demand in the market prior to the pandemic, at which point there was a fourth as much vacant space as today.

And while the overall average asking rent for office space in San Francisco ticked down another 150 basis points over the past quarter to $73.66 per square foot, and has dropped around 11 percent from its peak in 2020, “rents in top tier buildings remain strong” and the average asking rent hasn’t moved much over the past two years but is poised to take a significant hit, despite the best efforts of landlords to keep the asking price metric up.

Inventory Up, Home Sales and Prices Down in San Francisco