As of this afternoon, 252,845 of the ballots cast by San Francisco voters in this past Tuesday’s election have been tallied, which equates to 50.5 percent of the potential 500,516 votes, as newly mapped by precinct turnout above.

But with around 124,000 vote-by-mail or provisional ballots that have yet to be processed, we’re projecting the final number of ballots to total over 370,000, which would yield a record setting mid-term turnout of around 75 percent.

In comparison, the turnout for the mid-term election in 2014 was 53 percent. The long-term average for mid-term election turnout in San Francisco is 58 percent. And the previous mid-term record, set in 1982, was 63 percent with a total of 238,991 ballots cast.

UPDATE (11/14): With 338,348 ballots having been tallied as of this morning and around 40,000 ballots remaining to be processed, the final turnout is on track to surpass 75 percent, as we projected above.

UPDATE (11/20): With roughly 2,500 ballots remaining to be processed, the turnout count has hit 74 percent (74.31% to be precise, as newly mapped below) and will likely be finalized at just under 75 percent, as we projected above. 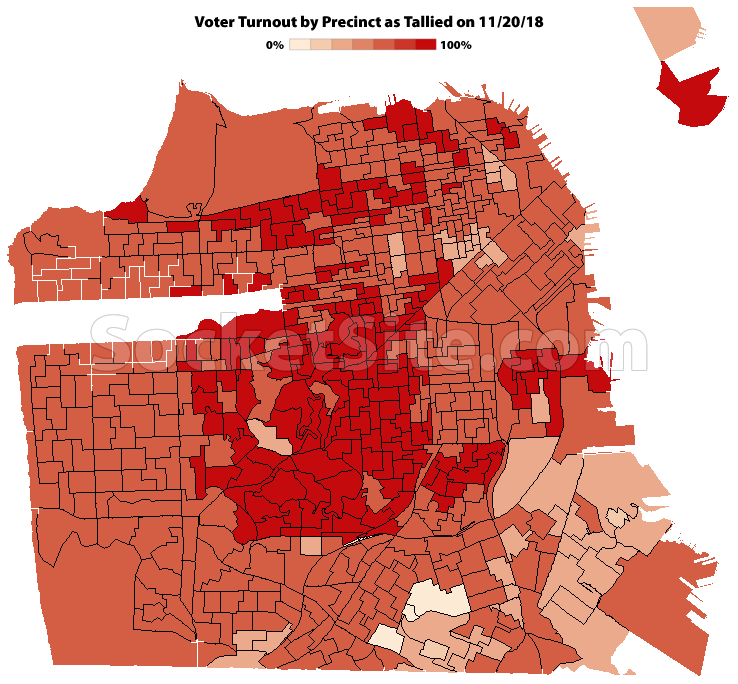