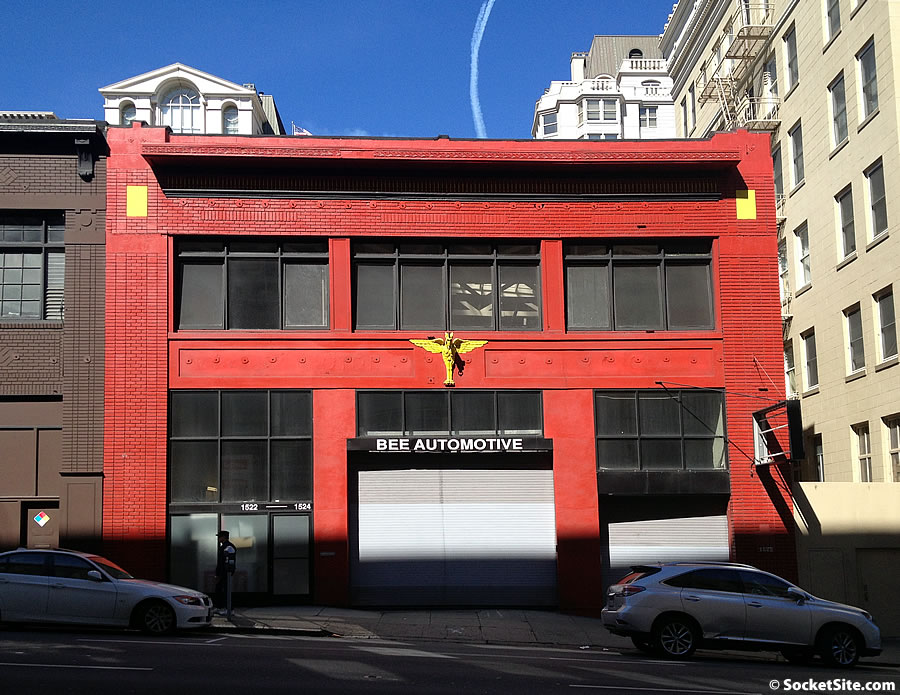 Purchased by MXB Battery LP, which shares the same Pacific Heights address as Michael and Xochi Birch, the founders of The Battery, for $4.2 million in 2014 and transferred to the MXB Family LP last year, plans to convert the former Bee Automotive garage at 1522 Bush Street into a high-end residence have been quietly working their way through Planning.

As originally envisioned, the upper half of the 13,500-square-foot structure would have been converted into a single-family home, with a roof deck above and a private office, storage space and parking below.

After meeting with Planning, Jensen Architects subsequently drafted plans for three intertwined units to be constructed within the building’s envelope, with a 900-square-foot roof deck above, two bedrooms on the mezzanine, an artist’s workshop/studio (and more residential rooms) below, and an open 1,400-square-foot courtyard on the second floor with a landscaped path leading up to the roof deck.

But while a variance and buildings permits for the estimated $3.25 million redevelopment were sought and approved, it appears as though MXB is now abandoning the project as 1522 Bush Street has just returned to the market with a $6 million price tag and no mention of the drawings nor plans.

Keep in mind that the existing building, which was built on spec and flipped by a developer back in 1916, has been deemed a potential historic resource (both individually and as a contributor to San Francisco’s Historic Auto District) but also sits on a Van Ness Corridor parcel that is zoned for development up to 130 feet in height.

Parking for More Desks and Fewer Cars in Downtown Oakland