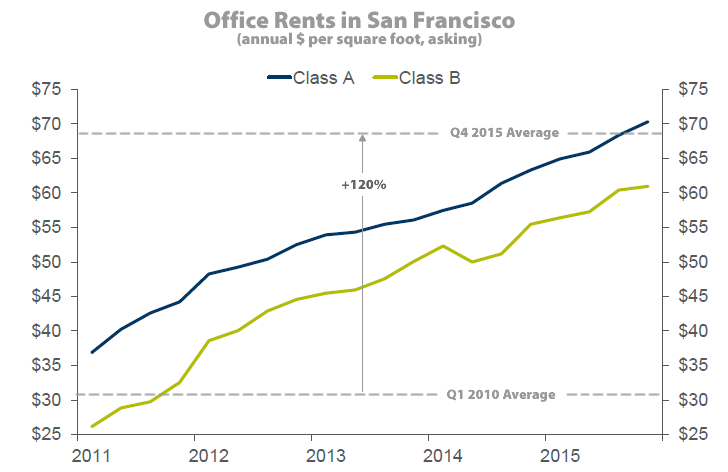 The average asking rent for office space in San Francisco hit a record high of $68.14 per square foot at the end of 2015, surpassing the dot-com record of $66.00 per square foot set in the fourth quarter of 2000 by 3.2 percent. And at 5.9 percent, the current office vacancy rate is the lowest in over 15 years, but still will above the historic 1.3 percent rate recorded in the second quarter of 2000, according to Cushman & Wakefield.

Having jumped 5.2 percent from the second to third quarter of 2015, the acceleration of rents slowed in the fourth quarter, having only increased 2.1 percent from the quarter before. But office rents in the city have increased over 15 percent over the past year and have more than doubled since a post-recession low of around $31 per square foot in the first quarter of 2010.

The amount of leased but vacant space that’s available for sublease currently measures around 730,000 square feet, which represents 16 percent of the 4.5 million square feet of currently available space on the market.

And of the 7 million square feet of office space that is currently under construction or entitled for development in San Francisco, roughly 1.5 million square feet will be delivered in the first half of 2016, all but 4 percent of which has been pre-leased, including LinkedIn’s 450,000 square foot building at 222 Second Street.