Single-family home values within the San Francisco MSA ticked up a nominal 0.1 percent from October to November but are running 8.9 percent higher on a year-over-year basis. And local condominium values have hit an all-time high, according to the latest S&P Case-Shiller Home Price Index.

Keep in mind that while the aggregate index for San Francisco home values has gained 67 percent since early 2009, it remains 10 percent below its 2006 peak.

And while the indexes for the top two thirds of the market both gained 0.1 percent in November and are respectively running 8.1 percent and 9.4 percent higher on a year-over-year basis, the bottom third of the market fell 1.3 percent in November, the first recorded drop for the bottom tier since early 2012 and the smallest year-over-year gain (13.4 percent) since 2012 as well. 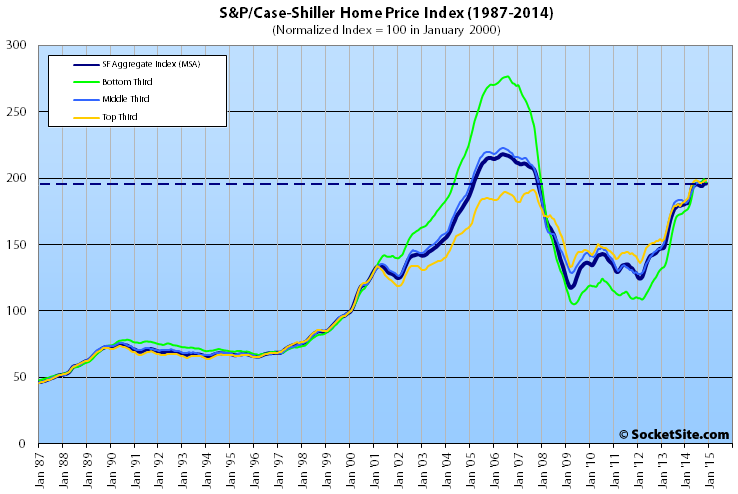 According to the index, single-family home values for the bottom third of the market in the San Francisco MSA are back below May 2004 levels (29 percent below an August 2006 peak); the middle third is back to just above February 2005 levels (11 percent below a May 2006 peak); and values for the top third of the market are 3.6 percent above their August 2007 peak, just below the all-time high reached this past June.

Condo values in San Francisco ticked up to a new all-time high in November, up 0.9 percent from the month before, 11.4 percent higher on a year-over-year basis, and 6.0 percent higher than at the previous cycle peak reached in October of 2005. 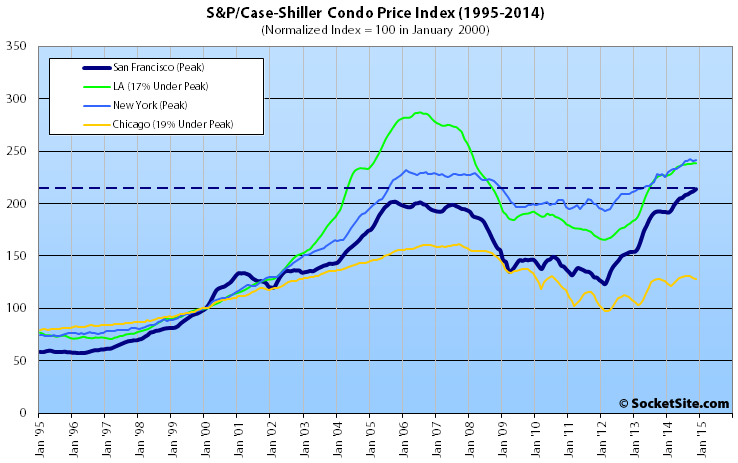 For the broader 10-City U.S. composite index, home values slipped 0.3 percent in November.  And while the composite index is running 4.2 percent higher on a year-over-year basis, it remains 17.0 percent below its June 2006 peak and the year-over-year gain last month was the lowest since late 2012.

Has A Million Really "Vanished" From The SoMa Community Fund?