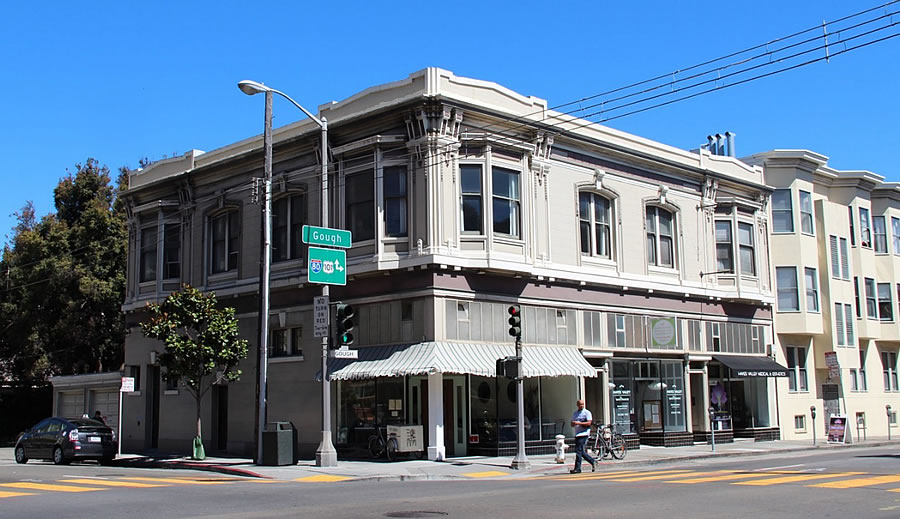 Against the wishes of the building’s owner, San Francisco’s Historic Preservation Commission is poised to recommend that the two-story R. L. Goldberg Building at 182-198 Gough Street be designated a historic landmark by San Francisco’s Board of Supervisors.

Initiated by the residential tenants of the building who are fighting an Ellis Act eviction from their two three-bedroom apartments for which they pay $1,250 and $1,300 a month, the landmark designation won’t block the eviction nor any remodeling of the building’s interior, but it would protect the exterior and prevent the building from being razed.

From the Planning Department’s case report which supports the landmarking:

The Department finds that the building may have tangential significance based on its association with Rueben (Rube) Lucius Garrett Goldberg, but its primary significance is derived from its architectural expression.

According to the Landmark Designation Report, the building was commissioned by Rube L. Goldberg, a Pulitzer Prize-winning cartoonist famed for his illustrations of elaborate contraptions designed to perform otherwise simple tasks. Goldberg was born in San Francisco and received a degree in engineering from U.C. Berkeley in 1904. After brief period of employment with the City of San Francisco Water and Sewers Department, Goldberg joined the staff of The San Francisco Chronicle where he submitted drawings and cartoons which were first published in 1905.

In 1907 Goldberg moved to New York where he was hired by the New York Evening Mail to draw daily cartoons. His drawings proved popular, and over the next few years he also began to appear on stage. Flush with his early success, Goldberg returned to San Francisco and commissioned the construction of the subject property, which includes his name, “R. L. Goldberg,” inscribed on the building’s frieze.

According to the Landmark Designation Report, one of the two residential units was used by Goldberg as his residence and studio during visits to San Francisco, while the other was occupied by his father, Max Goldberg, who at various times served as a police commissioner, fire marshal and banker.  However, the only documentary evidence in support of the Goldbergs’ residency at the property is a childhood reminiscence from Rube Goldberg’s granddaughter, during which she recalls him describing the property. The report also does not identify other properties which may have a more intimate association with Goldberg’s productive life.

Goldberg spent most of his career in New York City, and the Landmark Designation Report acknowledges that Goldberg’s association with 182-198 Gough Street became less frequent after 1916— although he continued to own the property until his death in 1970.

Research performed by Department Preservation staff could not confirm Goldberg’s use of the property as an occasional residence and studio, nor its use as a residence by Goldberg’s father. For example, the 1914 city directory identifies Leonard Jones (steward), Frederick Littman (machinist) and William Black as residents of the property. There are two Max Goldberg’s listed in the directory of that year, neither of which is identified with the subject property.

Likewise, the 1915 city directory identifies Frederick Eggers (Sherriff of San Francisco) and Allen Walter (musician) as tenants. None of the four Max Goldbergs in the city directory of that year are shown at 182-198 Gough. Based on this research, it appears more plausible that the building was constructed as an income producing property, rather than as an occasional residence for the Goldberg family.

Considered as a whole, the Department finds that 182-198 Gough Street is eligible as an individual landmark due to its significant architecture, but cannot confirm its significance based on the building’s association with Rube Goldberg.

Regardless of the designation, the tenants vow to fight their eviction while the landlord, who had offered the tenants $40,000 to vacate, plans to move forward.  The City’s Historic Preservation Commission will vote next week.