Grand Jury: Gloomy Outlook For Affordable Housing In SF, Unless… 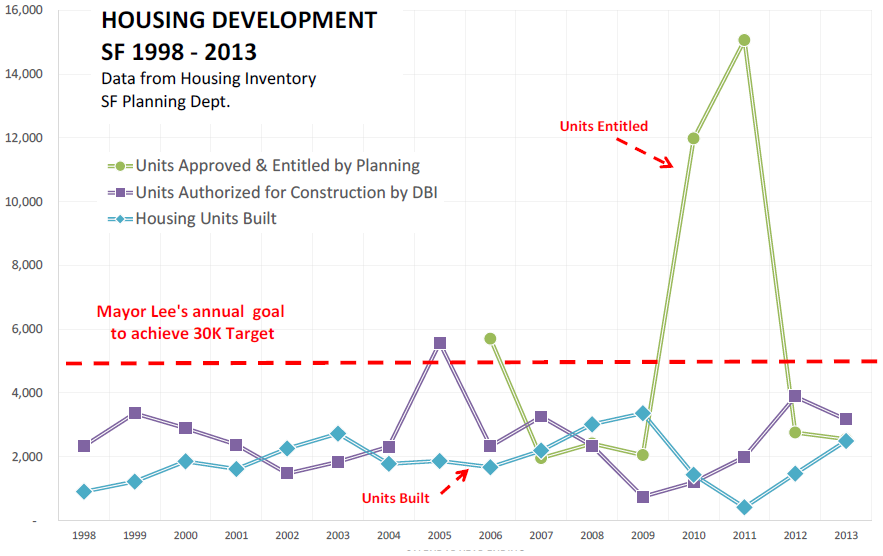 In order to meet the Mayor’s goal of creating 30,000 new and rehabilitated homes in San Francisco by 2020, developers will need to deliver an average of 5,000 units of housing per year for the next six years, an average that is greater than any single year’s maximum to date.

In addition, in order to meet the Mayor’s goal of having one-third (10,000) of those 30,000 units considered to be “affordable” to households with incomes of under 120 percent of the Area Median, not only will all the Housing Authority’s Public Housing rehabs (4,575) need to be counted and completed, but all of the affordable units in the city’s current housing pipeline — which already includes the development of Treasure Island, Hunters Point, and Parkmerced — will need to be delivered as well.  And then some.

From the conclusions of a Civil Grand Jury which set out to investigate the feasibility of delivering a successful response to the Mayor’s housing production goals:

San Francisco Affordable Housing production will be particularly challenged once the [San Francisco Redevelopment Agency and Office of Community Infrastructure and Investment] dissolution is complete. Couple this loss with decreasing State and Federal funding resources and the picture could be glum for providing additional housing support to financially vulnerable segments of the City’s population. However, the Jury does subscribe to the notion that the availability of housing that is affordable to the widest spectrum of socio-economic levels fosters a more vital and dynamic urban environment and is in the best long-term interest of all our citizens. This means continuing to invest in building Affordable Housing stock to provide opportunities to those in need who otherwise are unable to afford market rate pricing.

Residential projects take years to design and build. It is not unusual for projects to take 4-6 years in the City today and rarely can a project be completed in two years from entitlement. The Mayor’s 30K plan is a goal that will provide some relief to the current shortage, but exactly how far it will go in addressing the affordability issue depends on many factors and the outlook tends to be gloomy. San Francisco’s population increase toward one million by 2032, and its role as a job center and transit nexus, will mean more need for housing and competition for funds with a host of other infrastructure needs.

That being said, the Grand Jury’s report does note another possibility:  “On the other hand, the current affordability “crisis” could also dissipate, at least temporarily, should technology employment turn out to be a bubble, as occurred in 2000 after the “dot com” cycle when laid-off workers left San Francisco and vacancy rates increased.”

The Grand Jury’s full report: “The Mayor’s Office of Housing:  Under Pressure and Challenged to Preserve Diversity.”