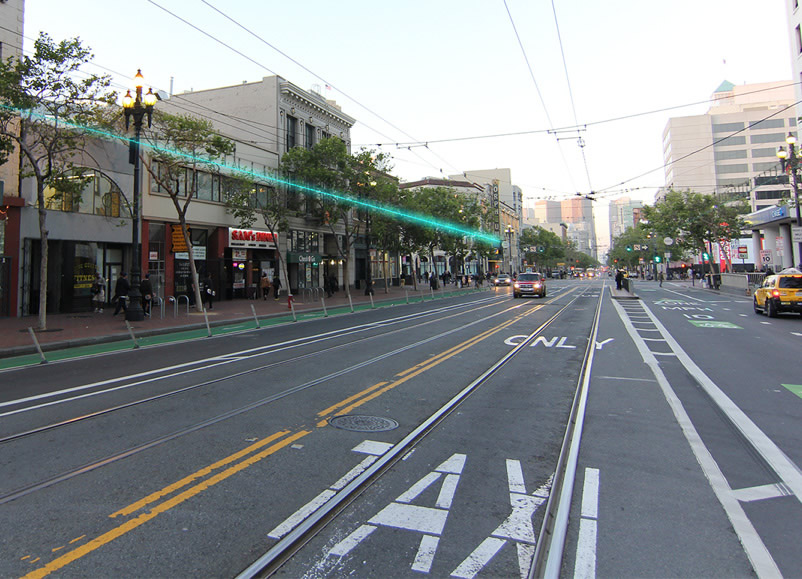 Illuminate the Arts, the group behind The Bay Lights which is currently illuminating the Bay Bridge, is working on another large-scale installation of LEDs in San Francisco.

The proposed “LightRail” installation would suspend LED tubes from the overhead MUNI lines along the 2.1 mile stretch of Market Street from One Market to Van Ness. The lights would modulate in conjunction with the MUNI lines below, “the world’s first subway-responsive light sculpture.”

The artwork will be temporary–lasting only through 2018, the year Market Street is slated to be reconfigured to better serve and inspire our city’s residents and visitors for generations to come.

In a contemporary nod to Market Street’s history of purposeful and beautiful illumination, LightRail mirrors the historic intention of the Path of Gold lights which created vibrancy through illumination more than a century ago. The Path of Gold lights have always served a dual purpose–delivering an inspiring and attractive aesthetic experience while fulfilling the utilitarian task of supporting the overhead catenary system of the electrified Market Street trolley line.

Having already received “explicit support” from the Mayor’s Office, the SF Arts Commission, SFDPW, and SFMTA, this week San Francisco’s Historic Preservation Committee will weigh-in with respect to the execution of the installation which includes mounting 83 boxes measuring 11.5″ x 40″ x 8″ to power the LEDs onto the Path of Gold light standards that line Market Street.

The Path of Gold light standards which run from 1 Market Street to 2490 Market Street between Castro and Collingwood were designated City Landmark No. 200 in 1991.

The New Heights Of Homes To Rise In Visitacion Valley