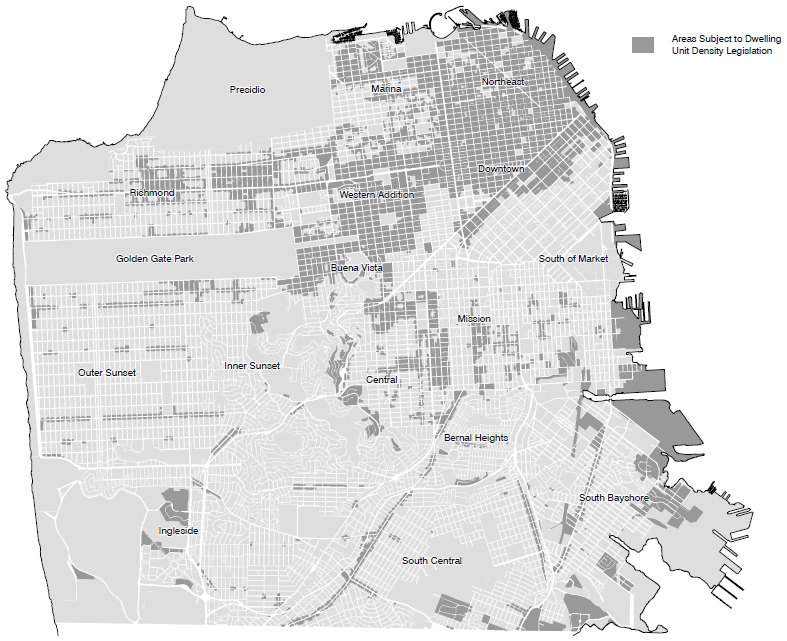 For many areas in San Francisco, the number of dwelling units allowed to be built upon a parcel is strictly limited by the size of the lot.  For example, within districts zoned RM-1, a common designation which allows for the development of apartments and condos, a developer is allowed to build no more than one dwelling unit for each 800 square feet of lot area.

The current density limits in San Francisco apply regardless of the proposed size of the units to be built and any Below Market Rate (BMR) units count towards the limit.  As a result, developers often choose to pay an in-lieu fee rather than building affordable housing onsite, maximize the number of market rate units that can be built.

As proposed by Supervisor Wiener and to be reviewed this week, new legislation would exempt BMR units from the maximum density calculation in a number of districts in exchange for a developer designating at least 20 percent of the building as affordable versus the 12 percent that’s current required for development onsite.

The proposed legislation would not provide any exemptions from other existing limits, such as the height or bulk of the building allowed to rise on the lot, nor would it reduce any requirements for a development’s open space.  It would simply allow for more units to be built on the same site.

The [Planning] Department projects that this legislation could facilitate some new affordable and market rate housing production. First, the potential density benefit could encourage projects to provide 20% affordable units onsite. This is a net gain in affordable units from the required 12% onsite requirement. Also, this program could incentivize projects that might otherwise elect to pay the inclusionary housing fee to elect to build the affordable housing units on site, in order to receive the density bonus. This legislation could also benefit parcels, in a limited number of districts in the City, which are zoned for residential use yet their total development capacity is constrained by density limits, rather than the other Planning Code requirements…

However, the Department projects that the total number of development projects that will elect to take advantage of this program will be limited based on a few factors. To start, most parcels in the City are not eligible to participate in this program. The proposed legislation would not apply to RH-1 and RH-2 districts, which make up approximately 72 percent of all existing land parcels, and 50 percent of the City’s developable acreage (meaning non-open space or land that is not federally owned).

The legislation would also not apply to areas subject to a redevelopment plan (such as Mission Bay and Transbay) nor to a district within which density is regulated by bulk and height rather than simply lot size.