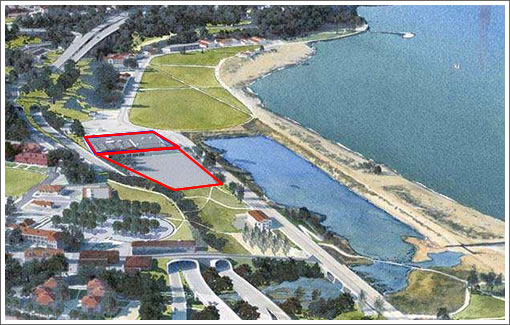 Reaffirming its “strong commitment to accomplishing an outcome in the Mid-Crissy area that will protect the park and bring long-term benefit to the Presidio and its visitors,” the Presidio Trust Board of Directors has exercised its option of “not necessarily selecting any team” to redevelop the former Commissary and current Sports Basement site across from Crissy Field and has asked the three finalists to revise and resubmit their proposals.

“The Board believes that there is tremendous thought, creativity, and potential in the proposals offered by the three finalists. The Board also understands that it holds the option of not necessarily selecting any team at this point. Such is the importance of the site that we take seriously our duty to do right by it, even if that means waiting. That said, we are very enthusiastic about the proposals, and appreciate the wonderful work that has gone into them, the generosity behind them, and the promise they hold for enhancing the Presidio.

We have sought to engage in a fair and open public process – from the development of the Mid-Crissy design guidelines, to the release, in November 2012, of the Request for Concept Proposals and the subsequent Request for Proposals. In the interest of transparency, the Board would like to share its observations at this point in the process.”

Focusing on “achieving program clarity, ensuring the building’s compatibility with the Presidio, and understanding how economic viability will be assured,” the Board’s observations and feedback for the three finalists to consider should they elect to revise and resubmit a proposal:

Feedback for The Bridge/Sustainability Institute Team: 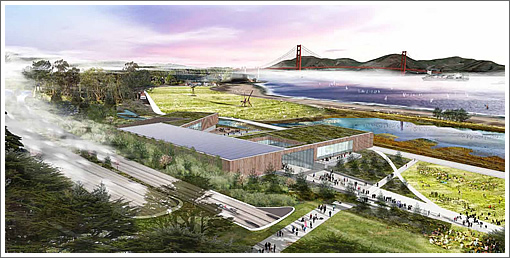 An amazing architectural group has teamed up with a compelling programmatic visionary around the issues of sustainability. We agree with the proponents that sustainability is “perhaps the defining issue of our time,” and appreciate the blending of the physical building and the program in an effort to advance a holistic understanding of sustainability. We also see a clear connection between the sustainability issue and our work at the Presidio – in environmental restoration, historic preservation, environmental education, and financial sustainability. We are concerned, however, about the institutional capacity of the team to, without significant funds or fundraising help from the Trust, deliver and sustain the project financially. We encourage the WRNS/Chora team to bring more clarity to the question of who might fund the building and early programming, and what institution will be created to operate and sustain the Bridge. While the building is “light on the land,” it is also too large and we urge some consolidation of the building program. 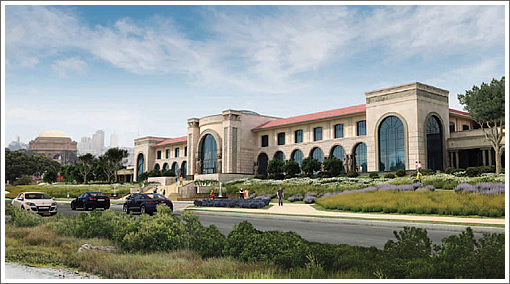 The Board recognizes and appreciates both the generosity and opportunity represented in George Lucas’s offer to build a cultural arts museum in the Presidio. We are enthusiastic about the state-of-the-art exhibits, strong community programming, and notable art collection that is offered in the proposal. The Trust is particularly excited about the potential of exceptional educational programming to draw diverse audiences to the museum and the greater Presidio. Despite this, we have significant issues with the proposed building – its massing and height, and its architectural style – and believe should be redesigned to be more compatible with the Presidio. We would also like to understand more fully the potential role of the Trust in partnership with LCAM, particularly in creating programmatic connections that would add value to other park programs throughout the Presidio. 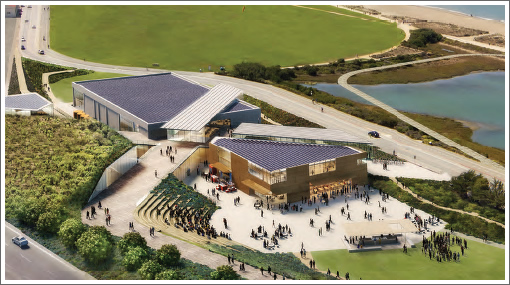 There is no question about the level of expertise, design excellence and community engagement that the Golden Gate National Parks Conservancy brings to each project it undertakes. The Presidio, and the broader Golden Gate National Recreation Area, is replete with examples of the Conservancy’s good work and of its ethos of partnership in the public interest. The Conservancy’s approach to programming at the PX – intended to be varied, flexible and relevant over time to park audiences – is fascinating. Yet, these attributes also make it harder to understand what the PX is truly striving for programmatically. What is the master narrative? Is there an overall theme, or focus, that can be better articulated so that the Trust will understand how PX programming will differ from/complement existing or planned programs, such as the Presidio Visitor Center, Heritage Center, and Crissy Field Center?

Revised proposals are due by January 3, 2014 with a public meeting to discuss the revisions to be scheduled for later that month. The Presidio Trust Board will indicate a direction for the Mid-Crissy site following the public meeting in January.