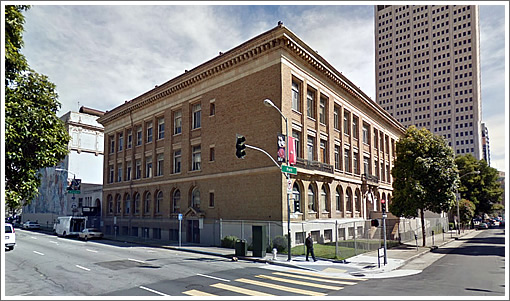 The City and County of San Francisco owns 6,000 acres, or 20 percent of the land, within its County limits and another 92,000 acres beyond.

Concerned that surplus and underutilized real estate owned by San Francisco’s City and County agencies could be put to better use (“providing for housing or commercial, cultural, and/or civic activities”) and increase the City’s tax base, a Civil Grand Jury has come to the following six findings and recommendations for the City, including putting 170 Fell Street (pictured above) and its adjacent complex of historic buildings to a more productive use post-haste:

Finding 1:
Inadequate readily-accessible public information on publicly-owned real estate is part of the reason some properties have been allowed to languish and deteriorate, at a loss to the City. A more rational approach to handling under-utilized or surplus property requires that a comprehensive, detailed list of public properties is available on an ongoing basis.

The Fleishhacker Pool House is a perfect example of a situation where being “out of sight, out of mind” allowed a property to become so neglected that it eventually was destroyed by fire, resulting in a real loss for the City. A more transparent property database will make such occurrences less likely in future.

Recommendation 1.1: The web-based San Francisco Property Information Map currently used to display Planning and Building Inspection Department information should be integrated with and further developed by other departments to convey complete information about City properties. The Department of Technology and the Planning Department should work with and provide database access to all City departments enabling them to maintain the information on their properties.

Recommendation 1.2: The online database of all properties owned by SFUSD and all City departments, including revenue-generating enterprise departments, needs to include information required by Chapter 23A of the Administrative Code [San Francisco’s Surplus City Property Ordinance].

Recommendation 1.3: City departments, commissions and agencies should be directed to maintain and update their departmental real estate database, which appears in the Real Estate Division Map of Real Property and Property Book.

Recommendation 1.4: The Director of Real Estate should be required to review the list annually to confirm that all departments have made a complete report on their properties, including surplus and underutilized properties, in accordance with the requirements of Chapter 23A of the Administrative Code; and the City Administrator should be required to report annually to the Board of Supervisors regarding the City’s real property assets.

Finding 2:
Lack of transparent public debate contributes to suboptimal use of City real estate assets.
The Kirkland Property is a perfect case in point. SFMTA may have a good case for retaining the property as a bus maintenance yard as recommended by its consultant. However, allowing SFMTA to abandon stated plans for converting the property to commercial and/or residential use without public debate prevents possibly better, more economically efficient alternatives from being considered.

Recommendation 2: The City and SFUSD should activate their respective Surplus Property Advisory Committees because the meetings of these committees provide a public forum in which to discuss best uses of publicly-owned real estate and each committee should be charged with monitoring uses of public property and making sure that there is ongoing accountability with respect to surplus and underutilized properties.

Finding 3:
The purposes for which the Surplus Property Ordinance was adopted are too narrow to effectively motivate City departments to identify surplus and underutilized properties for other uses or disposition. Further, the ordinance does not provide a department with any incentive to dispose of surplus or underutilized property.

Finding 4:
Current practice allows City Departments and SFUSD to keep property on their surplus list indefinitely without any consequence. The concern for a more rational approach to handling under-utilized or surplus property requires that a time limit be imposed on how long property may remain on these lists. If, after a pre-determined period, property which is identified as surplus or underutilized has not been put into use or fully-utilized or no plans have been adopted for its use or full-utilization, there should be specified consequences for the failure to act.

Recommendation 4: The Board of Supervisors and the SF Board of Education should each adopt rules which limit the length of time property may remain on their respective surplus list without action and which address consequences for such inaction.

Finding 5:
Passive management of publicly-owned real estate leads to valuable properties lying fallow for years. The City and SFUSD leadership must be charged and empowered to develop plans for utilization of surplus / under-utilized parcels, including public-private partnerships where feasible and desirable.

Very valuable properties owned by City departments and SFUSD have been underutilized for decades and present prime opportunities to be repurposed or sold to create value for the City and SFUSD. The properties at 155/165 Grove Street, the Fire Chief’s House at 870 Bush Street, the lot at 7th Avenue and Lawton Street, and 1950 Mission Street are a few examples of properties that have been passively managed.

Recommendation 5.1: The SFUSD needs to designate someone who is given appropriate authority and whose time and energy is devoted to optimizing the use of surplus and under-utilized real estate through its development or disposition. That person should work with the Capital Planning Policy Committee and Surplus Property Advisory Committee to incorporate surplus and underutilized property into SFUSD’s 10-year rolling Capital Plan.

Given the location of 135 Van Ness Avenue and 170 Fell Street in the heart of the City’s cultural center, and the historic nature of the structures, their current status is far from the highest and best use of these unique properties. Plans by SFUSD to convert the properties into the School of the Arts have not moved forward because of, among other reasons, a lack of needed funding. Yet, at the time, and now, SFUSD owned and continues to own, sufficient surplus and underutilized property that if sold could fund the entire project.

Other alternative and better uses of this complex may be possible.

Recommendation 6: The entire complex of historic buildings at 135 Van Ness / 170 Fell Street, including Nourse Auditorium, should be put to productive use by, for example, converting the complex into the School for the Arts.

The Civil Grand Jury’s full report: Optimizing the Use of Publicly-Owned Real Estate.