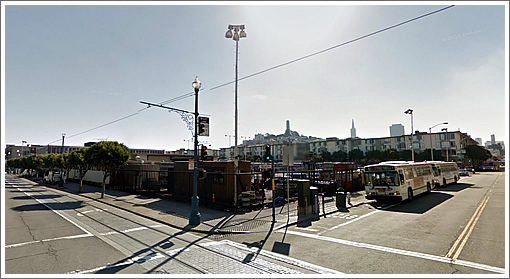 The San Francisco Municipal Transportation Agency (SFMTA) has operated the Kirkland Yard bus depot on Beach Street between Powell and Stockton for over sixty years.

The 2.6 acre Fisherman’s Wharf adjacent parcel was once part of San Francisco Bay before it was filled in 1886 and was privately owned until 1942 when it was acquired by the Department of War. In 1947 the parcel was transferred to the City of San Francisco. And in 1950, the site began to serve as a bus storage and maintenance yard.

A relocation of the Kirkland Yard’s buses and operations to a new, larger facility at Cesar Chavez and I-280 was originally scheduled for 2008, but the new Islais Creek depot won’t be finished until 2014. And while the SFMTA had been in negotiations to sell the current Kirkland Yard site to the Mayor’s Office of Housing for the development of 220 rental units once the depot was moved, the SFMTA has reversed course and declared the existing Kirkland Yard “an essential element” of their real estate portfolio.

According to San Francisco’s Director of Transportation, Edward Reiskin, “given the growth in the City and the new transportation projects and vehicles required to support the growth plus the fact that most of the transit facilities are now in the southern part of the City, the SMFTA [feels it is] imperative that we continue to use Kirkland as a transit facility.”

That being said, the SFMTA is considering covering the existing Yard with a canopy to reduce its impact on the surrounding neighborhood. The North Waterfront site is zoned for development up to 40-feet in height.

Potrero Hill Compound Takes A Million Off The Top