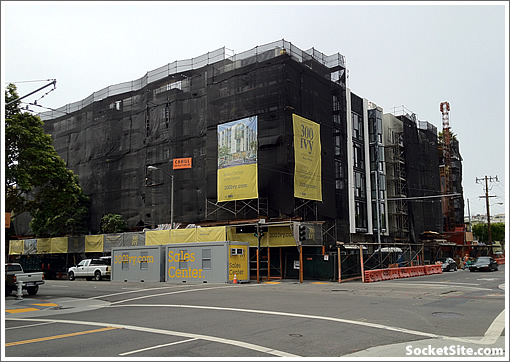 Nine of the 63 new Hayes Valley condos under construction at 300 Ivy (aka 401 Grove Street) will be sold for as little as $236,862 for a 624 square foot one-bedroom and $355,404 for one three-bedroom with 1,605 square feet.
So what’s the catch? As part of the Mayor’s Office of Housing and Community Development Below Market Rate (BMR) Inclusionary Housing Program, applicants for the 9 BMR units cannot make more than 90 percent of the area median income, which means a single person can make no more than $63,750 a year, a couple can make no more than $72,850, and a couple with a child can have a current annual income of no more than $82,000 to qualify.
While the prices above do not include a parking space, five spaces will be made available by lottery to the buyers of the nine units for $75,000 each.
Applications are due by 5pm on September 24, 2013. Pass it along.
∙ 401 Grove Street Gets Its Groove On Despite Intimations Otherwise [SocketSite]
∙ 300 Ivy Street Below Market Rate Housing Program [sf-moh.org]

Bank-Owned A Block From Dolores Park

Making The Most Of 520 Square Feet