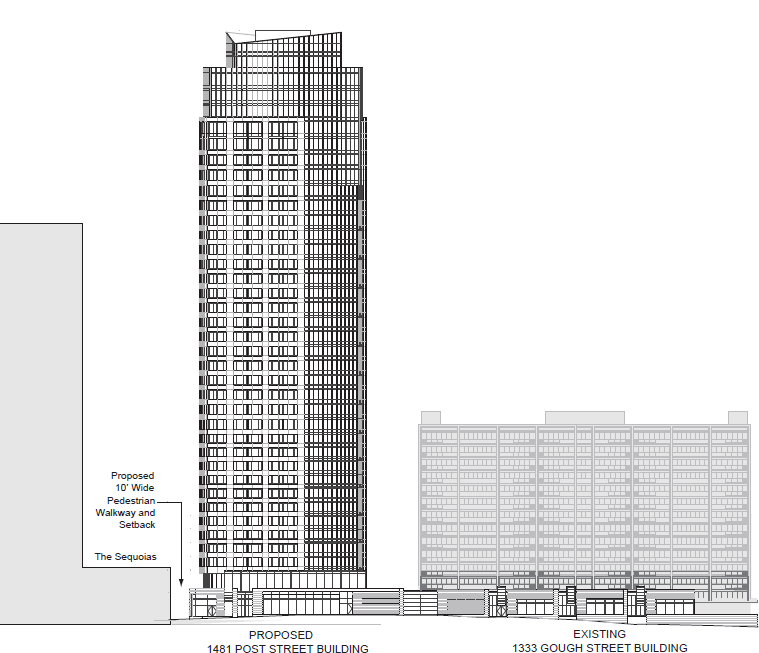 While SOM’s designs for a 38-story, elliptical-shaped glass tower to rise atop Cathedral Hill have been kicked to the curb, ADCO has dusted off their plans to build a tower at 1481 Post Street with new designs for a 36-story tower rising up to 416 feet across from Saint Mary’s Cathedral.

An existing parking structure with tennis courts and a pool building would be razed to make way for the proposed tower off of Geary, the designs for which includes 262 condos, a subsurface garage, and café along Post Street at the northwest corner of the project site: 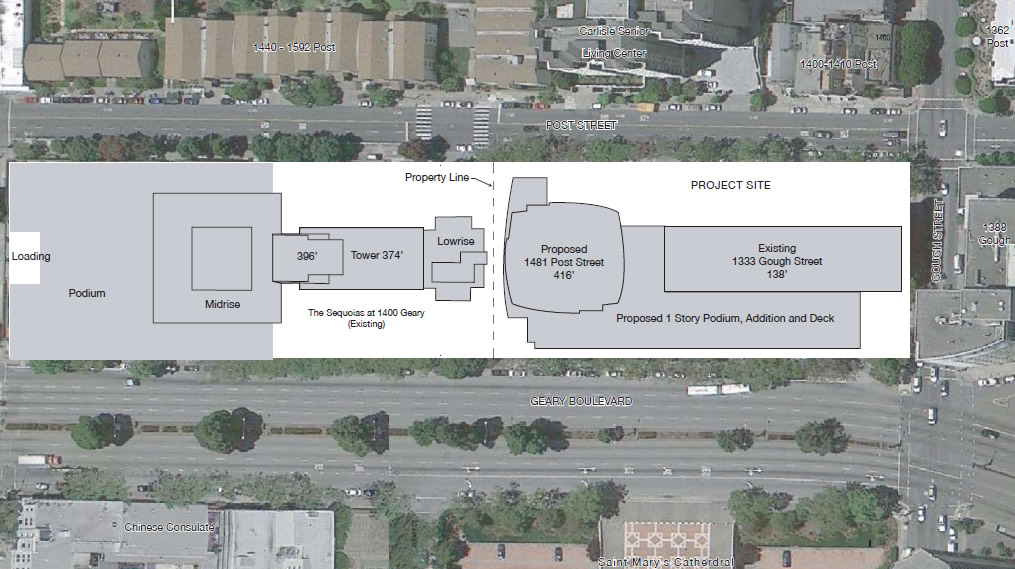 The proposed 1481 Post Street building would consist of a ground-floor podium element, surmounted by a vertical tower element (398 feet tall, plus mechanical equipment, screening and architectural features to reach a total height of 416 feet). The 20-foot-tall ground floor would be set back about 47 feet from the Post Street sidewalk and about 10 feet from the Geary Boulevard sidewalk.

The proposed café at the northwest corner of the project site would project northward toward Post Street, set back about 15 feet from the Post Street sidewalk. Along its west façade, the ground-floor podium would bow outward in plan. The podium would be set back a minimum of 10 feet from the west property line shared with The Sequoias at the midpoint of the podium (separated by about 16 feet, 8 inches from the low-rise portion of the Sequoias building at that building’s nearest point). Within the west setback, a ground-level, publicly accessible pedestrian walkway would be constructed to provide a midblock passage between Post Street and Geary Boulevard. The pedestrian walkway would be gated at both ends and would be open to the public during daylight hours.

Currently only zoned for 240-feet in height, San Francisco’s Planning Commission and Board of Supervisors will need to approve an up-zoning of the parcel to 410-feet in order for the project to proceed as proposed.

The shadows which would be cast by the proposed tower upon Cottage Row Mini-Park, Hamilton Recreation Center, Peace Plaza, and Raymond Kimbell Playground would also need to be deemed as not adverse to the use of the parks.

Back Near The Heights (And Full House Façade) On Broderick