One Signature Away From Landmarking The Duboce Park District 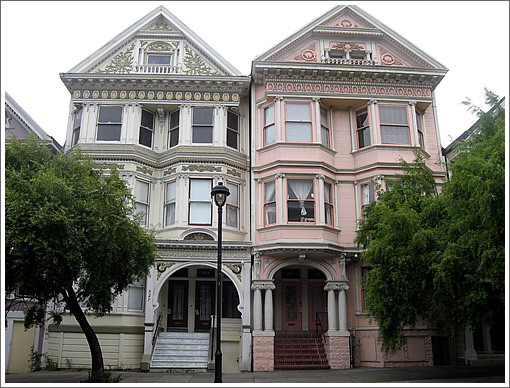 Unanimously approved by San Francisco’s Board of Supervisors yesterday, the Duboce Park neighborhood is now only the Mayor’s signature away from becoming an official landmark. 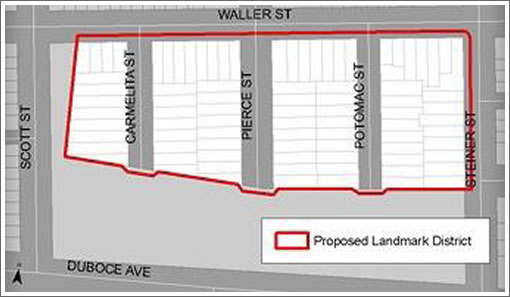 Duboce Park will be the twelfth of San Francisco’s landmarked districts, the eleventh of which is the Dogpatch Historic District which was designated in 2003.
Once again, a bit of history for how the tract of land upon which the Duboce District ever came to be developed and the way in which the contested nature of the tract impacted the District’s physical appearance and connection to Duboce Park:

The tract (formerly known as the Public Reservation, Hospital Lot, and Marion Tract) was subject to a decades-long series of court battles over legal ownership, with the City of San Francisco losing half of its claim to the land to the German Savings and Loan Association in the late 1890s. After acquiring title to half of the tract, the bank subdivided the land, carved out interior block streets, and sold lots to builders who developed the residential portion of the tract. The lots sold quickly and a handful of builders immediately began developing the parcels.

Due to the delay in development caused by the litigation, construction dates for the vast majority of contributing resources within the district range from 1899 to approximately 1902. This short period of development and limited number of builders resulted in a remarkably uniform streetscape of Victorian- and Edwardian-era houses and flats of similar design and proportion. The contested nature of the tract, its history as a debris dump, and neighborhood activism and development of the adjacent civic park are key themes linked to the Duboce Park Landmark District.

One important visible manifestation of this interrelated history is found at the park’s northern border – specifically the lack of separation between the park and residential buildings. The district represents the best example of San Francisco’s handful of municipal parks that directly abut residential buildings, without any separation of a street or sidewalk. In addition, the historic stone steps and rock retaining walls at the three interior block park entrances – Carmelita, Pierce, and Potomac Streets – reflect the transformation of the City-owned portion of the contested tract from a dumping ground for Serpentine rock rubble to a picturesque, landscaped civic park. Serpentine rock rubble is also found in the foundations of many district buildings.

CVS's Intense Plans For An Empty Building On 19th Avenue