Roughly 190 projects were authorized for development by San Francisco’s Planning Commission over the past eight years with a three year window within which to start construction or risk losing their entitlements to build. Of the 190 approved projects, only 85 have been built or are currently under construction.
Of the 105 approved projects that haven’t started construction, 15 projects have obtained permits but haven’t started contstruction while 55 projects have applied for permits but haven’t yet obtained them and 35 projects haven’t applied for permits at all.
Of the approximately 90 projects that have been approved but which have not yet obtained a permit, 50 have already exceeded their three year window in which to start construction while another 10 will exceed their windows in less than a year.
And of the approximately 50 projects that have exceeded the time frames set forth in their Authorizations, there are 35 residential projects accounting for 2,600 dwelling units and 15 significant non-residential projects (such as those adding at least 10,000 square feet or constructing major new buildings).
Recognizing that the economic crisis from which San Francisco is beginning to recover might have waylaid a share of the dormant projects while weighing the cost of attempting to enforce or extend the three year performance period under which the 90 yet to be permitted projects were approved, San Francisco’s Planning Commission has established a “one-time” economic stimulus program in an attempt to stimulate development.
Under the terms of the stimulus program, sponsors of approved projects who wish to take advantage of the program must respond to the Planning Department by June 3, 2013 and obtain a Building Permit to start construction by October 4, 2014.
The map of where all the already approved but yet to be permitted projects lie across the city of San Francisco, click the image to enlarge: 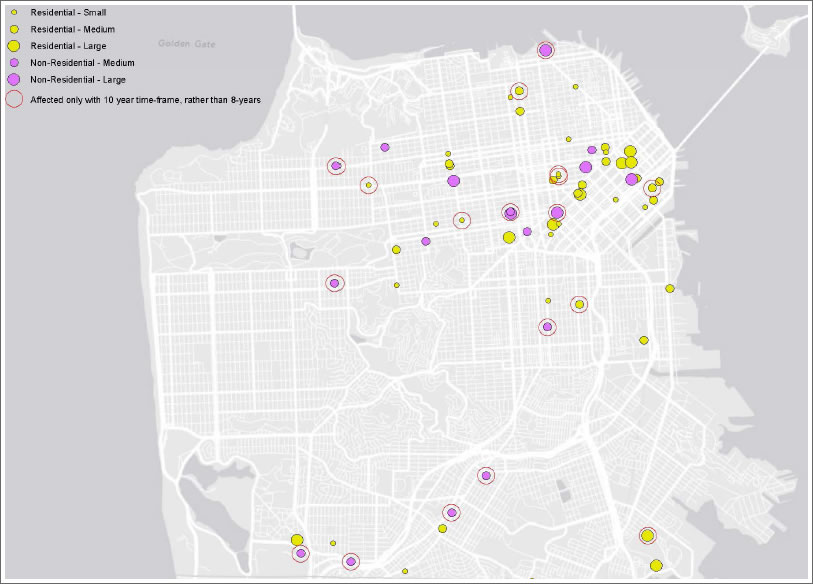