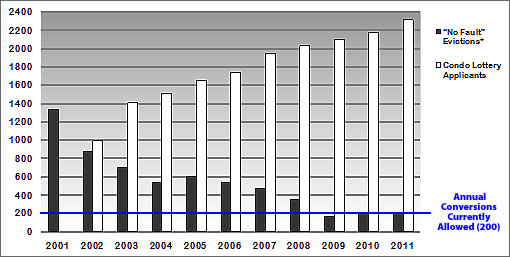 At 1 PM today, San Francisco’s Land Use Committee which is chaired by Supervisor Wiener is scheduled to vote on whether or not to allow proposed Condo Conversion Lottery Bypass legislation to move forward to San Francisco’s Board of Supervisors for adoption.
The proposed legislation which was introduced by Supervisors Wiener and Farrell last June would allow eligible TIC owners to condo convert for a one-time fee of $20,000 per unit.
As we first reported last year, while the proposed fee amount is $20,000 per unit, said fee would be reduced for each year a unit has participated in the condominium conversion lottery, a reduction of 20 percent per year starting in year two, up to an 80 percent reduction for units that have participated for 5 years or more.
With roughly 2,500 units already seeking conversion, and a current cap of 200 conversions per year, the expected wait time to condo convert without the bypass is well over a decade, approaching two decades for new entrants.
While the terms of the proposed legislation would provide lifetime leases for existing tenants of converting units, the San Francisco Tenants Union opposes the lottery as an assault on Rent Control as condominiums are exempt from the controls.
Both opponents and proponents of the legislation are trying to rally their supporters to the steps of City Hall this afternoon. As always, we’ll keep you posted and plugged-in.
∙ The Devilish Details For Bypassing SF’s Condo Conversion Lottery [SocketSite]
∙ $20K To Condo Convert From TIC As Proposed [SocketSite]
∙ Condominium Conversion 2012 Lottery Deadline And Odds (Against) [SocketSite]

ACT(ing) Out: 970 Market Street Site Hits The Market Sans An Arts Use