The Historic Atherton House Is Headed For The Courthouse Steps 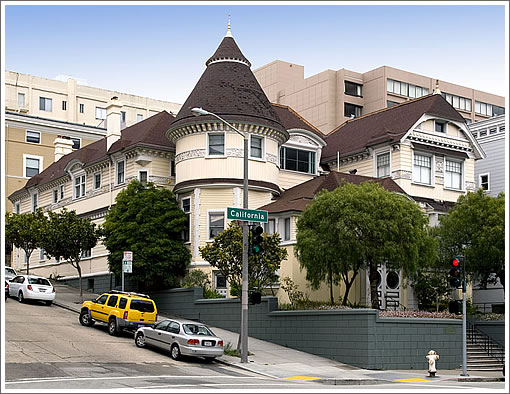 The Atherton House at 1990 California Street was built in 1881, commissioned by Dominga de Goni Atherton, widow of land speculator Faxon Dean Atherton after whom the town of Atherton down in San Mateo was named.

The house was subsequently divided into 12 apartments and landmarked in 1974, “despite the modifications, and notwithstanding the City Planning Commission’s own objections to its fundamental lack of a cohesive style.”

Currently in default with over $450,000 past due, the Atherton House was scheduled to hit the courthouse steps yesterday but a bankruptcy filing has delayed the foreclosure auction for at least another two weeks.

And yes, as was reported by a reader back in 2009, supposedly the house is haunted:

“I lived with my then partner Edward Kitson in [the] Ballroom for 1 month back in the late 70’s. Before we moved in we were asked by the then caretaker to stay in his apartment while he was away for a short time.

One very early morning we woke up and Edward had left the room, I remember rolling over in bed and there standing in a door way leading to a part of the house that was under construction was the blurry figure of a male figure. Non threatening and still very sleepy I thought nothing of it.

It was not until the next day or so that we had found out that the mansion was possibly haunted and was told the story of George Atherton. I then remembered what I saw that morning and to this day I still believe I saw his ghost and from what I have read and now know, I know I did.”

Accusations Of Obfuscation And Delay (And Planning's Playing Along)