Market Street Development Appealed But Up For Approval This Week 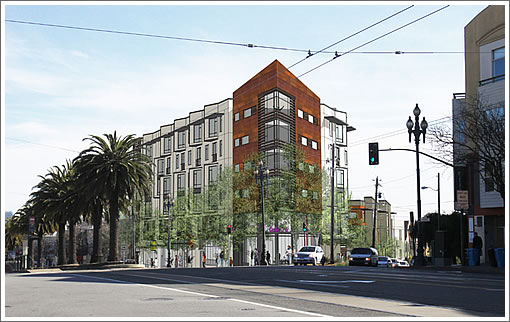 As we first reported with respect to Forest City’s proposed 88 unit development at 2175 Market Street, the Planning department issued a Preliminary Mitigated Negative Declaration with respect to the potential environmental effects of the proposed project last month, which is a good thing if you’re the developer and a step forward assuming the declaration was not (successfully) appealed within 20 days.
The Declaration was, of course, appealed.
In order for the project to proceed, San Francisco’s Planning Commission must now uphold the Negative Declaration and grant conditional use authorization to demolish the existing gas station at 2175 Market Street and construct the proposed 65-foot-tall building with 88 apartments and 7,300 square feet of retail space on the ground floor, a portion of which would be occupied by a yet to be determined restaurant (click the renderings to enlarge):

As we also first reported earlier this month, San Francisco’s Board of Supervisors has approved the issuance of up to $31,000,000 in tax-exempt mortgage revenue bonds to help finance the project, which if employed, would require 20 percent of the apartments to be below market rate (BMR) and occupied by households whose incomes do not exceed fifty percent of the area median income versus 15 percent of the units BMR as is currently proposed.

A Showcase Second Bedroom (So To Speak)