Plans to develop the 49,500 square foot parcel bordered by Oak, Octavia, Hickory and Laguna known as Parcel P over in Hayes Valley and currently home to part of the Hayes Valley Farm are up for approval next week.

With Avalon Bay having acquired the parcel, Build Inc.’s vision for breaking the development of the parcel into smaller pieces with different architects to create the feeling of an organically grown neighborhood is no longer, but Avalon’s design does employ “different forms and dwelling unit types, with varying architectural expression.” 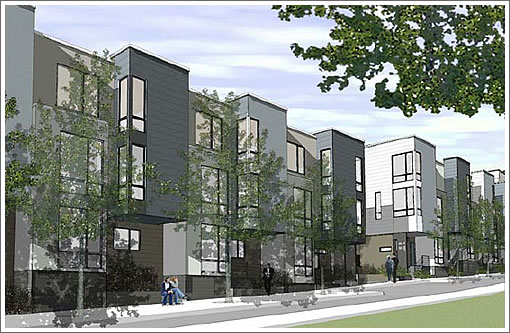 The proposal is to remove an existing surface parking lot and vegetation, regrade the project site, improve the Hickory Street right-of-way through the block along the northerly frontage of the property, and construct a new mixed-use building with 182 dwelling units, 3,800 square feet of retail space, and 91 off-street parking spaces, situated over a subterranean parking garage.

The project would vary in height across the site, reaching a maximum height of five stories. While the Project would consist of a single structure, the building would be articulated as a series of different forms and dwelling unit types, with varying architectural expression across the site.