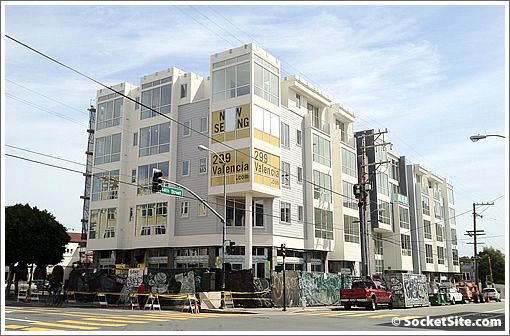 A plugged-in tipster reports with respect to 299 Valencia:

My friend just opened escrow on a unit there. The models aren’t even open to the public yet, elevator isn’t installed, lobby still under construction…just agents bringing clients in through a back staircase. Yet the building is almost 60% sold, according to the agent. The 4 BMRs aren’t even priced yet. They’re projecting the first closings for mid/late June.

Also noted by our tipster, “the building is called ‘299 Valencia’ but the address on deeds will actually be 380 14th Street. It’s going to be up to the Post Office if they’ll honor mail addressed to 299 Valencia.”