Pier Pressure And The Price San Francisco Taxpayers Might Pay 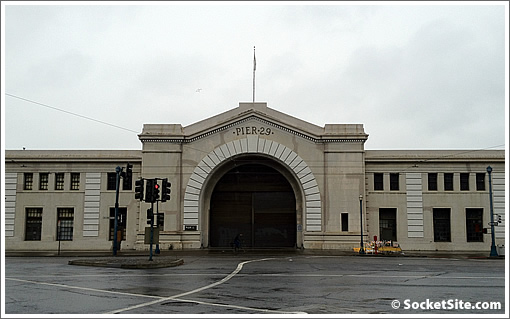 The latest budget report analyzing the financial impact of the 34th America’s Cup to be held in San Francisco favors an outcry to remove Pier 29 from the deal between the city and the America’s Cup Event Authority. From the Examiner:

Under the terms of the current deal, the authority would initially invest $55 million in pier improvements in exchange for a 66-year lease at Piers 30-32 and ownership of Seawall Lot 330, a property already approved for condos.

The authority could then opt to do additional pier work and get 66-year leases on piers 26, 28 and 29, which would trigger repayment from The City with an 11 percent interest rate. The report recommends that a cap be placed on the amount race officials can spend on improvements, or else The City could end up being roped into repayment for up to 91 years after the event.

The report suggests The City should nix Pier 29, at the foot of Telegraph Hill, from being transferred to race officials after the event. Board of Supervisors President David Chiu has been pointing to the lucrative property as a problem spot in the deal.

The Event Authority, however, has a different take (so to speak).

Stephen Barclay, a board member of the authority and the group’s primary negotiator, has been talking tough in recent weeks, saying concessions have already been made to mitigate the financial stress on the Port. Barclay said on Tuesday he will “draw the line” with Pier 29, because it is essential to the authority seeing a return on the total $111 million it plans to spend.

A Chef’s Restaurateur’s Kitchen And Misstep(s)