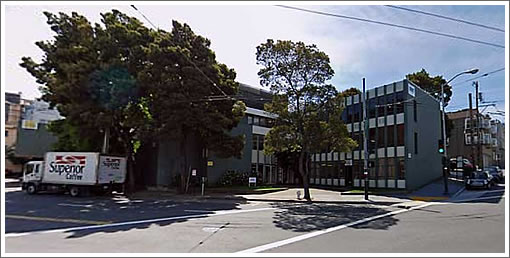 As proposed the existing 15,852-square-foot office building at the intersection of Columbus, North Point, and Leavenworth will be razed and a 54,420-square-foot, mixed-use building with 6,215 square feet of ground-floor commercial space, 20 residential units, and 20 parking spaces will rise eight feet higher in its place (click to enlarge).

While the project is headed for Negative Declaration with respect to its environmental impact, a positive thing if you’re the developer, the project will require variances for the 20 parking spaces, its large commercial space and small rear yard, and from the current prohibition of access to off-street parking from Columbus Avenue.

On Thursday, San Francisco’s Planning Commission is scheduled to vote on the requested variances as well as hear an appeal of the project’s aforementioned Negative Declaration.
That being said, having been in default on a $2,630,000 loan for the past year, the parcel is also currently scheduled to be foreclosed upon tomorrow unless the developers’ bankruptcy filing successfully delays a courthouse auction once again.
∙ New Construction Along Columbus (1255-1275) As Proposed [SocketSite]