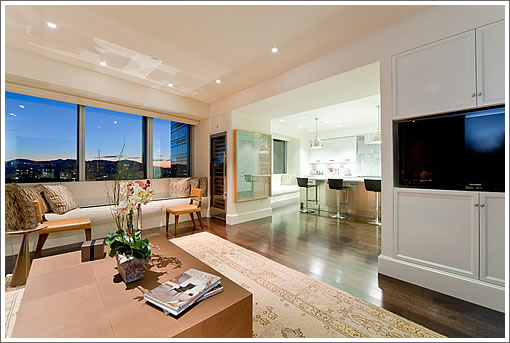 In 2007 the 3,318 square foot #27A at San Francisco’s Four Seasons (765 Market Street) was purchased for $5,000,000. Since then the three-bedroom condo has been redesigned (think moving a bath and the kitchen) and renovated with “signature details” by Orlando Diaz-Azcuy Design Associates (think not cheap).

And while you won’t currently find it on the public facing MLS, and it’s far from being an “apple,” the property is back on the market and asking $7,600,000 which includes the custom designed furniture.

The sale of #27A also represents the second most expensive in the history of the San Francisco Four Seasons, second only to the 4,336 square foot Grand Penthouse #A which sold for $8,975,000 ($2,070 per square) in 2008.
Don’t forget those invitations to the condowarming.
∙ San Francisco’s Four Seasons (765 Market) #27A: Winter 2011 [SocketSite]
∙ The Numbers Behind Perkins’ Millennium Penthouse Purchase [SocketSite]