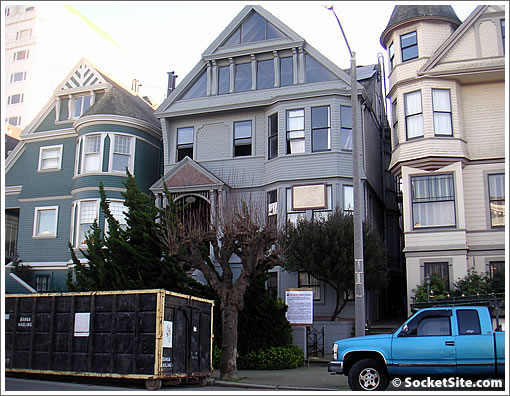 With no major projects in front of San Francisco’s Planning Commission today, this afternoon’s agenda is dominated by proposed additions and expansions of single-family homes such as the proposed project at 2507 Pacific Avenue.

The proposed project is opposed by their two (2) adjacent neighbors, thirty-five (35) others on the block or across the street, and the Pacific Heights Residents Association. Not a single neighbor near or far is on record with their support. But the Planning Department does recommend approving the project.

The proposed rear addition is shorter in height than the westerly neighbor’s building and is set back 11’-0” from the side of their building. The rear addition is similar in height to the easterly neighbor’s rear addition, and is approximately 3’-0” shorter in depth. In areas with a dense building pattern, some reduction of light to neighboring buildings can be expected with a building expansion. The Residential Design Team (RDT) does not find the project to result in an unusually great impact on light, nor does the RDT find the addition to be uncharacteristically deep or tall.

The proposed garage door is 9’‐0” wide and almost identical to both adjacent garage insertions in terms of width, height, and detailing. It is consistent with the Garage Guidelines and not out of character with the neighborhood pattern.

A headline from the applicant’s supporting documentation: “ALL PROPERTIES ON THIS BLOCK HAVE GARAGES EXCEPT THE SUBJECT PROPERTY.” And some insight from the former to the current owner of 2507 Pacific:

I don’t understand the reaction of some the neighbors who came to the meeting at my former home at 2507 to hear your architect tell about your plans for some expansion at the rear of the house. All which seem to be less and smaller than the code allows. You don’t seem to be asking for permission to add more than should be allowed.

The one neighbor to the east…was the most vocal about preserving everything just as it is and also the most irrational. He makes such a fuss and the funny thing is that in the years since he bought the house in 1990, he has never lived there, I doubt if they have stayed over more than a night or two because they spend all their time where they live in Santa Rosa. I have always been very aware of the lack of activity of someone living there, except for a caretaker who lives in the attic. Funny that they voiced questions to you about how large your family is and how many would be living in the house when their house is sitting empty.

Your proposal to add 8 feet to your house on their side seems like a very reasonable thing. Please note that their house already sticks out further than your house on their west side and probably 10 feet further on their east side where their kitchen/breakfast room is. So your addition would not affect their kitchen light. Your house is the smallest of the houses on this end of the block and an addition has always seemed like one I would have wanted to do but never was able to attempt. I’m not surprised that a new owner would have the same feelings.

The house to the west…is the largest of the houses on this end of the block and must stick out over 20 feet past the back of 2507. This extension has a generous setback on your side for windows and light should you add to your house on that side. I don’t believe he will [lose] much sun, especially since his kitchen and breakfast room is on the opposite side and will not be affected.

Another neighbor [at 2517] was suprisingly vocal and one would wonder why, since he cannot see the back of 2507 because [another objecting neighbor’s] house sticks out so far. I doubt that he can see it even if he goes all the way to the back of his garden. Another neighbor mentioned to me that he was upset because he has a son who he wants to buy a house close by so their grandchildren could be close. Thus he must be sour grapes because he would have liked to buy the house that you bought and would make trouble for you for no good reason.

Having lived in 2507 for over 40 years I have not been aware of any neighborhood objections being so vocal and for no reason. The houses across the street, 2500, 2510, 2512 have all had extensive remodels in recent years and there was no neighborhood meeting that I was aware of.

UPDATE: As has been noted, the 3,509 square foot home at 2507 Pacific was “listed” last January at $2,500,000, updated as in contract within two days, and then closed escrow in March with a reported contract price of $2,500,000.
And yes, the buyers are the same people behind projects like 2849 Pacific down the block.
∙ San Francisco Planning Commission Agenda: January 20, 2011 [sf-planning.org]
∙ Discretionary Review Analysis: 2507 Pacific Avenue [sf-planning.org]
∙ 2849 Pacific: A Million Dollar (Double) “Take” [SocketSite]