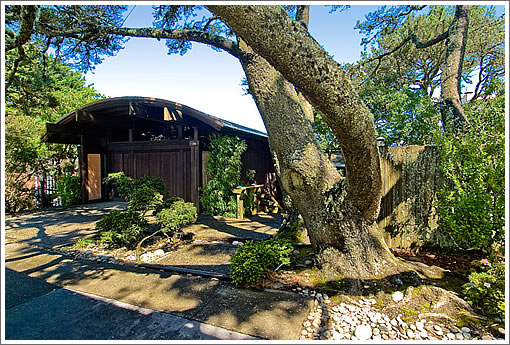 Unfortunately the listing photos for 176 Palo Alto Avenue currently leave a lot to be desired, but with more apparently “coming soon.”
Designed by Charles Warren Callister and built in 1959, the modernist home atop Twin Peaks features a vaulted roof inspired by San Francisco’s cable cars, gorgeous woodwork, and an Asian aesthetic throughout.
From a 2004 Chronicle piece on Callister:

Many modern homes proclaim a less-is-more aesthetic. Not Callister’s Duncan house, where three planks of wood are consistently used where one would do to create rhythm and visual texture, and where the two-story window that overlooks San Francisco from Twin Peaks is divided into three views by immense and deeply recessed wooden piers, each sculpted of multiple wooden members.

Adding further drama to the house is a vaulted roof of laminated wood.

His expressive use of wood joinery recalls Japan and the work of Arts and Crafts architects Greene and Greene, and it is not surprising that Callister is also a sculptor.

“The house has two moods — party and cathedral,” Gwendolyn Evans- Duncan says of the house, which was commissioned by her husband, Cloyce Duncan, in the late 1950s. “It really inspires meditation, creativity, abstract thought.”

The Proposed Façade For The Landmark Metro Theater At 2055 Union