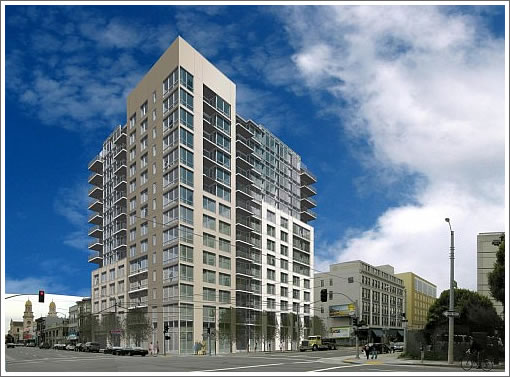 San Francisco’s full Board of Supervisors will now need to vote, but the board’s Land Use and Economic Development Committee has given the thumbs up to zoning changes that would clear the way for the development of 1415 Mission.

The building would be 14 stories and 130 feet in height, with a mechanical penthouse rising an additional 16 feet. Approximately 2,453 sq.ft. of common usable open space would be provided at the penthouse (roof) level for the use of residents. Seventy‐six of the 117 dwelling units would have access to private open space in the form of balconies or terraces, totaling approximately 4,200 sq.ft. There also would be a 58‐sq.ft. plaza for the retail use, which would not count toward open space square footages for Code purposes.

If approved, construction of the proposed project would occur over approximately 24 months. The project sponsor is R & K Investments and the project architect is Heller Manus Architects.

Once again, proposed to include roughly 26 studios, 39 one-bedrooms, and 52 two-bedrooms over street level retail and three levels of underground parking.
∙ 1415 Mission: Existing (Parking) And As Proposed (People) [SocketSite]

One (Oakland) Stadium To Rule Them All?

Just Cause And Parking Legislation Postponed, And Not Just Because